|| Photo by Adam Ruff/Icon Sportswire via Getty Images A good amount of defense, but not a lot of offense Penn State takes to .. 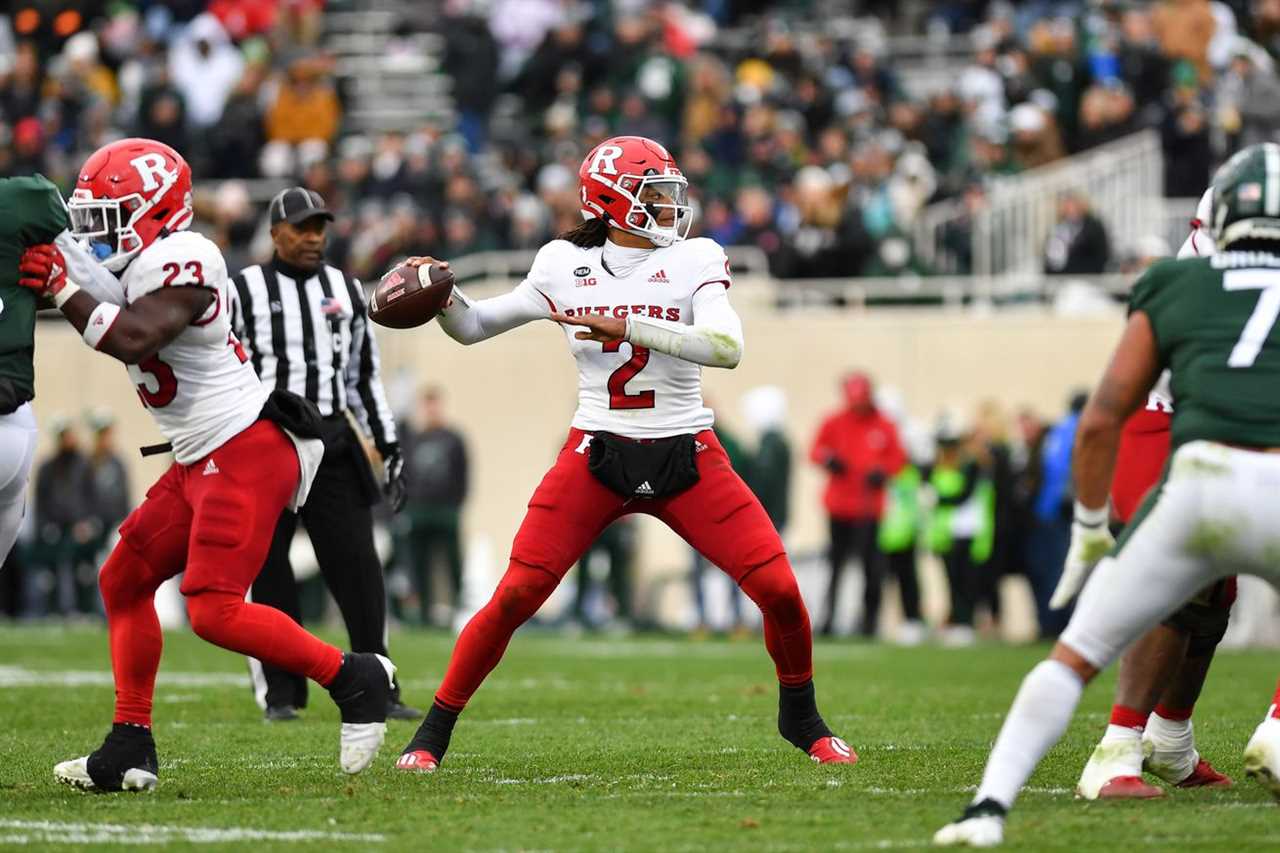 A good amount of defense, but not a lot of offense

Penn State takes to the road one last time in the regular season on Saturday, playing in a stadium where the Lions have never lost. However, recent trips to Rutgers have seen Penn State forced to slog through some sketchy weather and overcome some sloppy play.

But what about the team they’ll actually be facing in that matchup? We had some questions about the Scarlet Knights and Greg Patuto, of On The Banks, answered them.

1. It’s Year 3 of Greg Schiano being back with the program. Big picture, how are fans feeling about his progress and the future with him at the helm?

When Greg Schiano first returned in 2020, it was a huge move with plenty of hype. Of course, given the success that he had during his first stint in Piscataway. Now, it is in the Big Ten. The process is going to take much longer but the problem is, there is not much forward progress.

This season, the coaching staff has caused some disgruntled feelings. The offensive game was nonexistent early on and this led to Sean Gleeson being let go. Schiano has made some questionable in-game decisions. Even off the field, the personnel decisions, mainly at quarterback, have been back and forth. Now, fans of Rutgers and the program itself are hoping that Gavin Wimsatt and Samuel Brown V (we will get into both in depth below) are the future.

If this duo at QB and RB does not work out, Rutgers football will take even longer to get back to a competitive position. Right now, Schiano is still the right choice but it seems that the noise and confidence around this claim is not as boisterous as it was over the last two years.

2. Starting on offense, it seems quarterback has been an ongoing issue for years with the Scarlet Knights. Even this year, a lot of guys have taken snaps there. Tell us about Gavin Wimsatt and his recent performances. Could he finally be the one?

Fans are certainly hoping that Wimsatt is the one. He is the highest-quarterback recruit in program history. There was a big rush on throwing him into the starting role. I truly think this happened because he was healthy at the beginning of the season and Noah Vedral was not. There was a battle in the preseason and Vedral was not involved much because of his injury. Evan Simon ended up playing a majority of snaps early on — especially since Wimsatt ended up getting hurt.

Now, Wimsatt is healthy and has shown signs but is also a 19-year-old quarterback trying to gain experience in the Big Ten. This is no easy feat. He is coming off his best statistical game of his career against Michigan State. At this point, Rutgers just needs to see progression week-to-week. Wimsatt has made some rookie mistakes and has been inconsistent and struggled with accuracy. He is a great athlete and can use his legs to escape the pocket and gain yards on the ground.

Wimsatt has shown off some signs but has also made fans scratch their heads. Penn State is going to be a huge test with its defense. Next year though, is going to be very telling after a full offseason as the starter.

3. Aside from quarterback, could you give us an overview of the offense and what it might try to do against Penn State’s defense, which has been playing very well the past couple weeks?

The passing game has really struggled this year. Aron Cruickshank had six catches against Michigan State and he will have to be featured again. He is the most explosive player in the offense and it is really not that close. He can be used in different ways within the offense. Sean Ryan is a receiver that has broken out a bit but can disappear at times. Rutgers has no semblance of a downfield passing attack whatsoever.

On the ground, Brown V looked like the real deal as a freshman. He suffered a season-ending injury and it took two weeks for the offense to find a rhythm without him. On Saturday, Kyle Monangai totaled 162 yards on the ground. He was the No. 2 last season behind Isiah Pacheco and is comfortable carrying the load. He will be the feature back on Saturday.

Outside of that, there is not much to say. This is a unit that has really struggled this season and will likely be the case once again. We have seen. that Rutgers is usually unable to score points against Penn State.

4. Speaking of defense, Rutgers has always seemed to keep Penn State’s offense in check. How is that unit looking and who are some names to know?

The defense for Rutgers has been strong this season. The front has been able to stop the run but I am interested to see how the secondary handles Parker Washington and company. Max Melton and Christian Izien are experienced and both very talented.

Up front, the linebackers have stepped up, which was a major question mark heading into the season. Deion Jennings leads the team in tackles but missed Saturday’s game against Michigan State. Tyreem Powell is the other linebacker that has stepped into an extended role. Penn State likes to run the ball and has a really good two-headed monster back there. It will be a hard-nosed game in the trenches and that is what we like to see in the Big Ten.

5. Any keys or predictions for Saturday’s game?

Rutgers has to sustain drives and take care of the football. This sounds like a cliche but when you are overmatched, these two factors are even more important. Rutgers has not scored in double-figures against Penn State since 2014. That is amazing. In those seven games, Rutgers has scored 29 total points and has been shutout twice. There is a clear talent gap and the Nittany Lion defense likes to show it. Is this the year Rutgers can hit 10? I’m not too sure. Penn State 34, Rutgers 7.

6. Bonus Question - basketball season has started...Rutgers is off to a 3-0 start. How are you feeling about the Scarlet Knights’ place in the Big Ten and NCAA tournament picture?

What Steve Pikiell has done for the program is amazing. Despite losing Geo Baker and Ron Harper Jr., Rutgers is in a great spot in the Big Ten and should be a tournament team once again. They might even be better this year than last. Caleb McConnell is a National Defensive Player of the Year candidate while Cliff Omoruyi is one of the best bigs in the conference. Cam Spencer (transfer from Loyola-Maryland) is another X-Factor because of his ability to score the ball at all three levels.

For any program to be successful in any sport, there has to be carryover. Baker and Harper Jr. were credited with bringing the program into the national light. Now, it is important for Pikiell and the returning players to keep them there. This team has a chance to finish in the top 5-7 range in the Big Ten and earn another tournament bid with double-digit conference victories.

We thank Greg for his honesty and point you in the direction of On the Banks for coverage of Saturday’s game and beyond.