||Everton will lock horns with West Ham United at Goodison Park on Sunday afternoon, hoping to pick up a positive result on their home turf. The..

Everton will lock horns with West Ham United at Goodison Park on Sunday afternoon, hoping to pick up a positive result on their home turf. The Toffees will be coming into the match on the back of a 0-0 draw vs. Liverpool, whereas the Hammers recorded an encouraging 3-2 win against Silkeborg on matchday 2 of the Europa Conference League campaign.

David Moyes will probably opt for his usual 4-2-3-1 formation against Everton; however, he is expected to make a couple of changes from the last game for the upcoming away encounter as Antonio looks likely to start this weekend.

Lukasz Fabianski will operate in between the sticks for the away side. The Polish international will hope to put up a strong performance and secure a clean sheet on Sunday.

Kurt Zouma will form the customary centre-half partnership with Craig Dawson at the heart of West Ham’s backline.

Emerson Palmieri should be a starter at the left wing-back spot, whereas Vladimir Coufal will start on the other flank as the right wing-back. Up against the Toffees, the full-backs will be expected to stay compact defensively.

Tomas Soucek will feature alongside Declan Rice in the holding midfield position, with the latter being assigned with more of a defensive role to shield the away side’s back-four.

New signing Lucas Paqueta will slot in the attacking midfield position to complete the midfield trio. The Brazil international will be determined to engineer some clear-cut goal-scoring chances for the frontmen.

Said Benrahma will have to settle for a place on the bench but might come in the latter stages of the game if needed.

Pablo Fornals and Jarrod Bowen are expected to take up the wide positions, playing on the left and right wing respectively.

Michail Antonio is expected to lead the line for the visitors against Frank Lampard’s men this weekend. The Englishman will hope to make the most of his chances when he faces off against the Everton defence that has conceded five goals in their last five league matches. 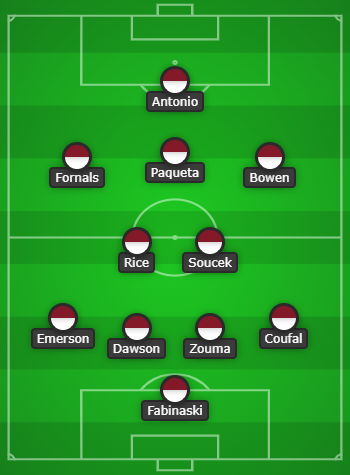