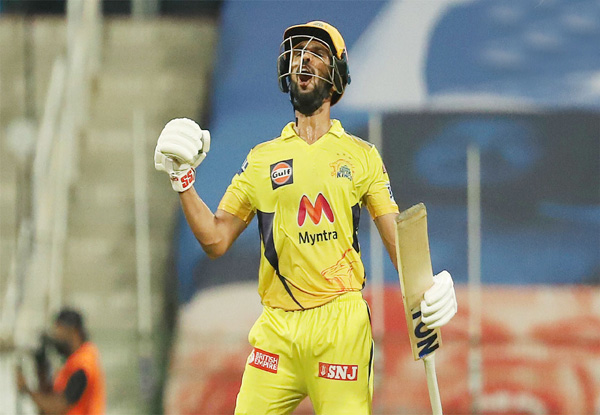 Xtra Time Web Desk: Ruturaj Gaikwad’s maiden ton in IPL went in vain as Rajasthan Royals clinched a convincing 7 wicket win over Chennai Super Kings to stay in hunt for the IPL 2021 Play Offs berth. Chasing a daunting 190 runs to win, RR made short work of the target with 2.3 overs to spare at Abu Dhabi on Saturday. Yashasvi Jaiswal (50 off 21) and Shivam Dube (64 off 42) were the key contributors for Royals.

The victory saw RR jump to 6th spot with 10 points with two more matches to go. The loss will not affect CSK as they have already sealed a place in Play Offs.

The star of the match was easily Ruturaj Gaikwad, who continued his good show in IPL 2021. His knock of 101 off 60 balls included nine fours and five sixes. Gaikwad’s sequence of scores since resumption of IPL is 88, 38, 30, 45 and now 101 not out. Ravindra Jadeja played a useful cameo of 32 not out off 15 balls. Chennai added 55 runs in the last 3.4 overs. For the Royals, leg-spinner Rahul Tewatia (3/39 in 4 overs) was the most successful bowler.

With 190 runs to win, little did anyone think that Rajasthan Royals’ Indian players would reply in kind and go even one better. Jaiswal, with six fours and three sixes, was given fine support by Evin Lewis (27 off 12 balls) in their opening stand of 77 in 5.2 overs which set up the game.

Aussie speedster Josh Hazlewood (0/54) was hit for three sixes in his first spell as the match slipped out of CSK’s grasp in the Powerpay itself. Jaiswal, whose game has improved from last season by a few notches, was seen flicking Hazlewood over deep mid-wicket and also hit a straight six during that knock. Sivam Dube on the other hand struck four fours and four sixes in his 42 ball knock.

The post IPL 2021: Ruturaj Gaikwad’s ton goes in vain as Rajasthan Royals pull off a comprehensive 7-wicket win against CSK first appeared on XtraTime | To get the best and exclusive sporting news, keep watching XtraTime.