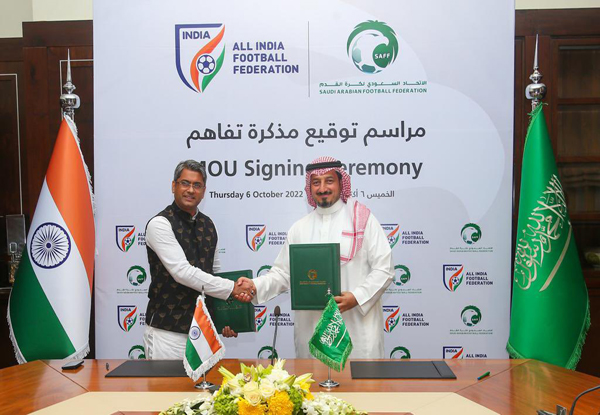 Xtra Time Web Desk: The All-India Football Federation (AIFF) is planning to conduct the knock-out phases of Santosh Trophy National Championship in Saudi Arabia at the beginning of next year. A Memorandum of Understanding (MoU) was signed between AIFF and Saudi Arabian counterparts on Thursday to “study the possibility of staging the final stage of the Santosh Trophy” in the West Asian country in February 2023.

“The idea is to host the knock-out phase of the Santosh Trophy in select cities in Saudi Arabia to encourage state level players to dream big and engage the larger Indian community in Saudi with Indian football and for both A win-win situation can be created for the Federation,” the AIFF said in a release.

AIFF President Kalyan Choubey said: “This is a remarkable development for Indian football. Our aim is to create a new platform for Indian Football and spread it among Indian fans all over the world. I sincerely thank Saif for his active support in realizing our goal.”

AIFF general secretary Shaji Prabhakaran said: “This is an out-of-the-box idea that I am sure will help Indian football carve a niche for itself amongst its loyal fans who follow Indian football eagerly. Our aim is to take Indian football forward and explore all the possibilities. We are confident that this move will inspire players across the country to showcase their performances in front of a large audience.”

The post Santosh Trophy knock out phases to be played in Saudi Arabia next year first appeared on XtraTime | To get the best and exclusive sporting news, keep watching XtraTime.||

By: XtraTime
Title: Santosh Trophy knock out phases to be played in Saudi Arabia next year
Sourced From: xtratime.in/santosh-trophy-knock-out-phases-to-be-played-in-saudi-arabia-next-year/
Published Date: Thu, 06 Oct 2022 19:05:52 +0000