Switzerland’s Breel Embolo refrains from celebrating after scoring against Cameroon. Do you know why? | Qatar 2022

||Switzerland’s Breel Embolo doing a muted celebration after scoring against his country of birth Cameroon in Group G clash of FIFA World Cup 2022 on .. 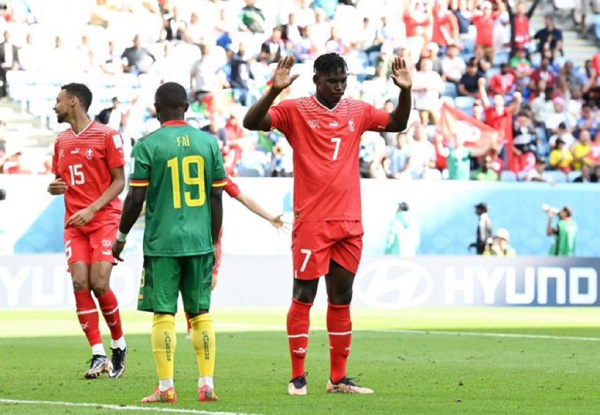 Xtra Time Web Desk: In a game of soccer, anyone scoring a goal celebrates and more so if it is on a stage like World Cup. But 25-year-old Breel Embolo, chose not to celebrate after he scored in the Group G clash of FIFA World Cup 2022 against Cameroon at Al Janoub Stadium on Thursday.

Embolo did not celebrate after his goal because he is a Cameroon national by birth. He was born in the City of Yaoundé in Cameroon. When he was only 5 years old his parents separated. Little Embolo shifted to France with his mother where she married a Swiss and permanently settled in Switzerland.

In 2014, Embolo became a Swiss national and made his professional debut for Swiss Super League club FC Basel that year.

He then moved to German club Schalke 04 in 2016 and went on to play for Borussia Monchengladbach in 2019 on a four-year contract. In the 132 appearances he made in Bundesliga, Embolo scored 28 goals and also has 29 assists.

Embolo currently plies his trade for French side Monoco in Ligue 1 where he has scored eight goals in 23 appearances in all competitions this season.

The post Switzerland’s Breel Embolo refrains from celebrating after scoring against Cameroon. Do you know why? | Qatar 2022 first appeared on XtraTime | To get the best and exclusive sporting news, keep watching XtraTime.||

By: XtraTime
Title: Switzerland’s Breel Embolo refrains from celebrating after scoring against Cameroon. Do you know why? | Qatar 2022
Sourced From: xtratime.in/switzerlands-breel-embolo-refrains-from-celebrating-after-scoring-against-cameroon-do-you-know-why-qatar-2022/
Published Date: Thu, 24 Nov 2022 14:03:52 +0000