||Tottenham Hotspur will clash heads with Leicester City on Saturday as they welcome them to North London. The Lilywhites will aim to bounce back..

Tottenham Hotspur will clash heads with Leicester City on Saturday as they welcome them to North London. The Lilywhites will aim to bounce back from their 2-0 Champions League defeat to Sporting Lisbon as they head into this Premier League clash. On the other hand, the Foxes went down 5-2 to Brighton & Hove Albion in their last outing.

Antonio Conte will most certainly opt for the 4-3-3 formation with Eric Dier continuing in the backline and Harry Kane leading the charge for his side.

Hugo Lloris will operate in between the sticks for the upcoming home encounter. The French shot-stopper will hope to put up a strong performance after conceding two goals in his last outing. Eric Dier will form the centre-half partnership alongside Christian Romero and Clement Lenglet at the heart of Spurs’ backline as they will collectively put an effort to stop the opposition attackers in their tracks.

Ben Davies would take a spot on the bench as he provides cover for the back three hoping to impress in the second half if needed.

Pierre-Emile Hojbjerg would pair up with Yves Bissouma in the holding midfield positions as they try to shield the back three and proficiently distribute the ball to their teammates. The midfield duo would be looking to make some decisive passes trying to set up the front three in the final third.

Emerson Royal will play as a right-sided wide player whereas Ryan Sessegnon features on the opposite flank. Both of them will get the license to move forward but will be tasked with keeping their shape defensively and tracking back on defence.

Ivan Perisic and Rodrigo Bentancur will have to settle for a spot on the bench, but they could come on to make an impact in the second half.

Son Heung-min and Richarlison will take up the wide areas, playing on the left and right wing respectively, trying to cut inside and create chances in front of the goal.

Harry Kane will lead the charge for Tottenham this weekend. The English international will fancy his chances of finding the back of the net and getting his name on the scoresheet.

Dejan Kulusevski will provide cover from the bench as he looks for an opportunity to impress in the attacking third, should Conte’s side require a goal in the second half. 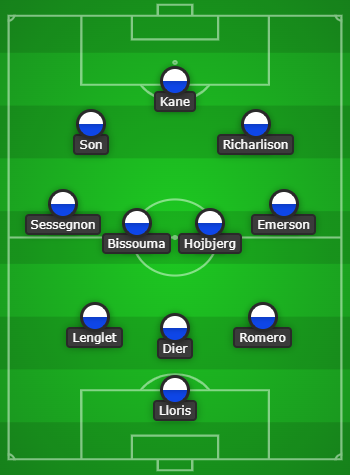