Xtra Time Web Desk: Following the viral footages of ticketless fans trying to get into the Wembley stadium for Sunday’s Euro 2020 final between Italy .. 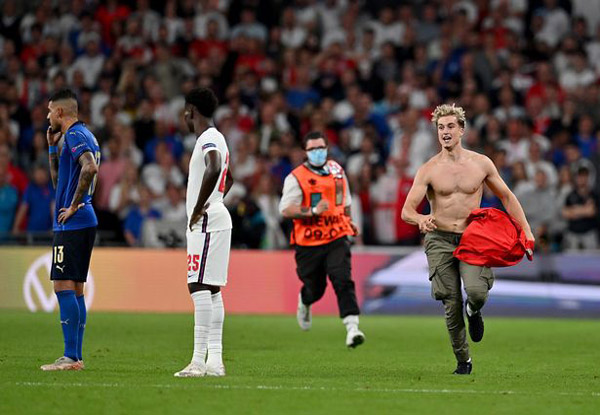 Xtra Time Web Desk: Following the viral footages of ticketless fans trying to get into the Wembley stadium for Sunday’s Euro 2020 final between Italy and England, a video clip of a shirtless man storming into the pitch during the final is going viral on social media. The man was chased by four stewards as he dodged past the first two, before finally getting caught. The incident temporarily halted the tense action in the middle. It was later revealed that the shirtless man was singer- songwriter Adam Harison who competed on Little Mix’s The Search.

“As always shirtless fan in the final is nothing unusual,” a fan tweeted along with the clip.

The eventful final match was marred by crowd trouble across the capital city of England. Unruly England supporters were seen beating up Italian fans as they left the Wembley stadium after the final. The Metropolitan Police managed to arrest 49 people charged with offence. There were also reports of racial slurs being targeted at the likes of Saka, Sancho and Rashford.

Talking about the final, England took an early lead in the match through Luke Shaw. Leonardo Bonucci scored the equalizer for the Azzurris. In the penalty shootout Italy had the last laugh as substitutes Jadon Sancho, Marcus Rashford and Bukayo Saka failed to score. Italy was crowned the European champions after 53 years.

The post Video: Streaker storms pitch at Wembley during Italy vs England Euro 2020 final first appeared on XtraTime | To get the best and exclusive sporting news, keep watching XtraTime.