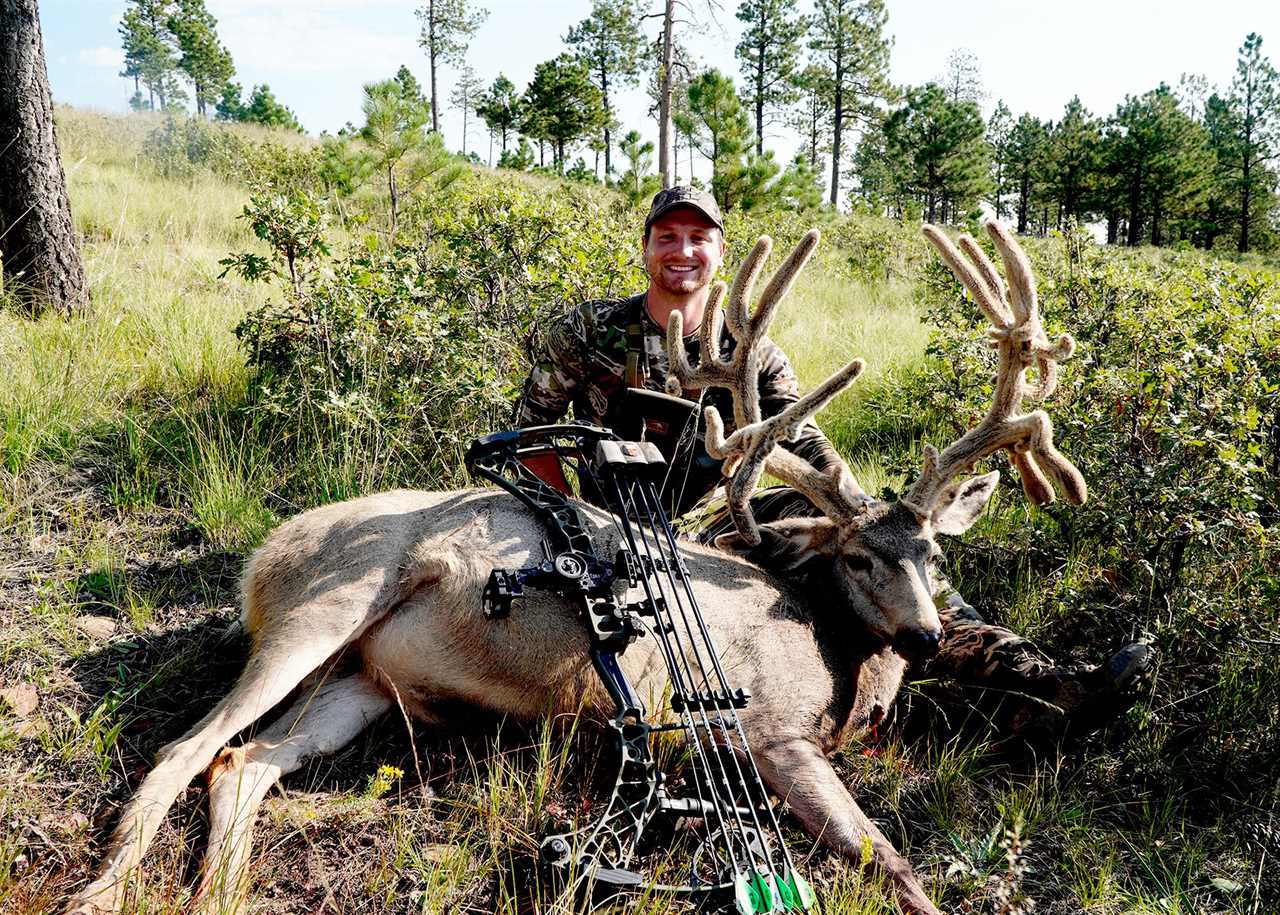 Few of us will ever be able to hunt Vermejo Park Ranch. The sprawling, full-service guest ranch owned by media mogul Ted Turner is most definitely a high-dollar destination. But if you’re going to drop the dough to chase mule deer at one of the largest and most luxurious game preserves in the West, you might as well also drop the biggest buck in ranch history.

At least that’s what Austin Musacchio did earlier this month, when he traveled from Dallas-Fort Worth to northern New Mexico for a 5-day guided hunt at Vermejo. On the fourth day of his hunt, he shot an absolute monster of a buck.

The nontypical 12×14 had a massive 2×3 mainframe with an explosion of antlers coming off it—including about 6 drop tines that were up to 6 inches long. Vermejo’s resident wildlife biologist Lance Bernal gave the buck a gross score of 225 and 3/8 inches. According to guide James Reedy and hunt manager Kyle Jackson, who keeps records of every animal killed at the ranch, it was the biggest mule deer buck taken off the property since it was purchased by Ted Turner in 1996.

The Hunt for a Ranch Record

Totaling around 560,000 acres, Vermejo Park Ranch is more like a privately-owned national park than your typical dude ranch. (Actually, it’s more like two privately-owned parks, since the property is almost the size of Grand Teton and Rocky Mountain National Parks combined.) It’s home to multiple high-end lodges—the largest of which is a turn-of-the-century mansion known as “Casa Grande”—and a staggering abundance of wildlife, including large herds of elk, bison, deer, and antelope. It’s free-range hunting (not high fenced) but the expansive privately owned and carefully managed landscape allows critters to grow old and massive.

Musacchio arrowed the buck around 7:45 in the morning on Sept. 8. Austin Musacchio

Musacchio has made a handful of trips up to the sportsman’s paradise along with his family, who have their own connection to Vermejo as the owners of Cinnamon Creek Ranch. One of the largest wild game processing facilities in the country, it’s the ultimate destination of most of the big-game animals that are harvested at Vermejo.

“The past three years I’ve hunted for mule deer up there,” Musacchio says. “I did a management hunt the last two years without killing one, but I saw trophies during both of those hunts. So I figured, man, I might as well save up and come back so I can try to shoot a trophy.”

After getting to Vermejo on Sunday, Sept. 4, Musacchio was paired up with long-time guide James Reedy. They split their time between hiking and driving through their assigned zone over the next few days, and they saw plenty of good deer but no shooters.

“Thursday morning came around and we decided to go up to the north ridge in Spring Canyon,” Musacchio says. “Reedy had killed a lot of good bucks on this ridge, so we drove up there from the lodge.”

Musacchio explains that since Vermejo has more than 900 natural gas wells, there’s a system of well roads on the ranch that are big enough for full-sized trucks. This allowed them to cover way more ground than they would on foot, and it meant that Musacchio could bring his fiancé along in the vehicle.

Driving in the early morning light, it wasn’t long before Reedy stopped and pointed at a set of antlers that were skylined up on the ridge.

“We get our binoculars out and James goes, ‘that’s him,’” Musacchio says. “I had never seen anything like it before in my life. He was super tall, nice and wide, with kickers and a crazy amount of drop tines. I was like holy shit.”

After taking a minute to compose himself, Musacchio asked Reedy if they should get out and stalk the buck. But his guide had a better idea.

“[Reedy] told me if they see us on foot, they’re gonna bolt. But because they see so many trucks working these well roads, it just might give us an advantage.”

So, they crept up the road and kept their eyes on the buck. He was in chest-high grass with a few other deer, and as they got closer to the group, Reedy told Musacchio to grab his bow and sneak out the passenger-side door. Scurrying alongside the truck, he stayed shielded from the deer as Reedy drove closer.

“I walked with him for a while—it felt like forever,” Musacchio says, “and then I got down to pull my bow back. The deer were standing 46 yards away in the brush, and when Reedy drove away they had their eyes on the truck and not me. The buck starts walking, takes two steps, and I’m at full draw just side-shuffling so I could get some sort of angle on him.” 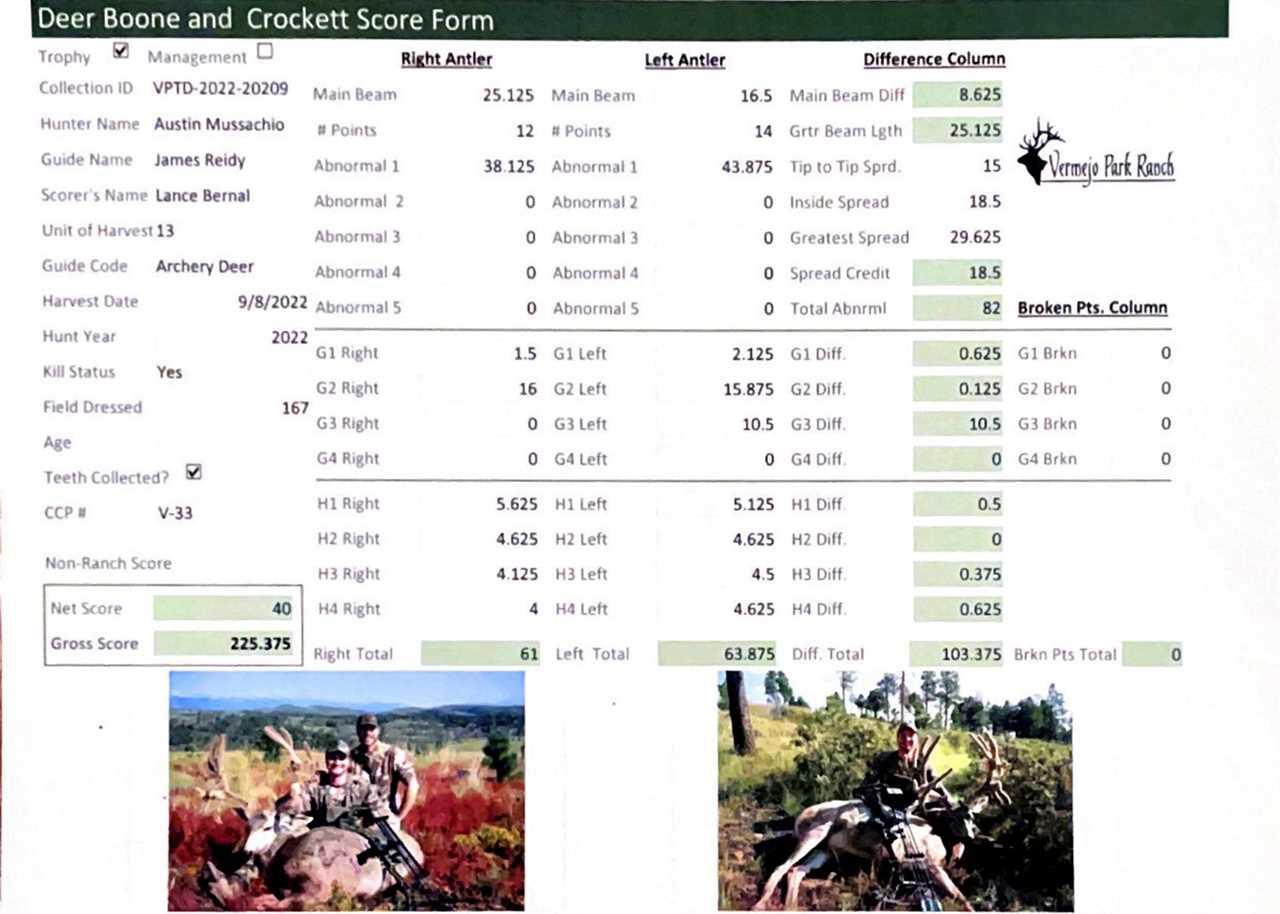 When the buck got to about 50-60 yards and was quartering away, Musacchio put his pin right above the heart and squeezed off the shot. He heard his arrow zip through the grass, and then he heard the tell-tale thump of the broadhead hitting muscle. The arrow hit high on the back of the deer’s neck and came out the front, severing its carotid artery. After waiting a full 45 minutes, they found the buck piled up in some bushes roughly 80 yards away.

“It was the happiest I’ve ever been,” says Musacchio, who was unable to hide his excitement. “My fiancé was there with us too. We had just recently gotten engaged, and she walked up and said, ‘You’re more excited about this deer than you are about being engaged.’