||Preview: The WWT season ends with Tour de RomandieAfter what feels like the longest season ever the women’s WorldTour calendar finally wraps up.. 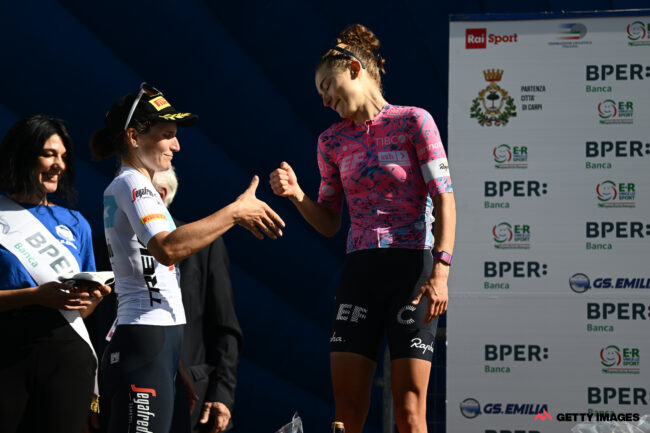 After what feels like the longest season ever the women’s WorldTour calendar finally wraps up with the inaugural Tour de Romandie over the weekend. The three-day event starts in Lausanne with a finish in Thyon 2000 before the final jersey is handed out in Geneva on Sunday.

All three stages feature a good amount of climbing, with the second stage finishing atop a long, nasty climb, so any climbers yet to take home top honors get this last shot to make an impression in 2022.

The race is the finale to the most extensive WorldTour calendar the women have ever raced, with the addition of multiple stage races including the Tour de France Femmes avec Zwift, Itzulia Women, the Tour of Scandinavia, and the revamped RideLondon Classic. Plus, with the World Championships in the rearview, the racing style will be a bit up in the air.

After they start in Lausanne the women will race a 134.4 loop before they finish just past where they started back in Lausanne.

The loop includes four category three climbs plus a handful of uncategorized climbs, however, the finish comes after about 15 km of flat.

It will be a great stage to kick off the race and will be a decisive day for those hoping to take the leader’s jersey.

A big general classification fight awaits on stage two with the climb to Thyon 2000. It’s a short stage, if you just look at the number of kilometres the women will cover, but since more than 20 km of the 104.5 km stage is uphill the distance will seem a lot longer for those in the race.

Before even arriving at the second sprint point that will signal the start of the mountain top finish the women also race up a category one climb that tops out 71.7 km into the stage. That first climb could be a launching pad for anyone who doesn’t want to go into the final climb with the strongest climbers, or could decide the race before the next ascent even starts.

It is likely the general classification will be done and dusted once the race finishes on Saturday.

The final stage is also the stage with the least amount of climbing, the only stage that could end in a reduced bunch if some opportunistic riders don’t take the day for themselves.

The 147.6 km from Fribourg to Geneva includes a category two climb early in the stage and a cat three with 32.7 km to go. From the top of the second climb the peloton descends to the finish.

A lot of teams who started the year with smaller rosters are hurting at this point. With the Worlds wrapped up a lot of riders have called it a season. On the flip side, some riders seem to have peaked for the last races of the year. Like Veronica Ewers, who will hopefully be tapped to lead for EF Education-Tibco-SVB. The American rider recently finished second behind Elisa Longo Borghini in both the Giro dell’Emilia and Tre Valli Varesine.

Ewers has turned heads since she won the second stage of Ceratizit Festival Elsy Jacobs in May followed by a win at Navarra Women’s Classic in Spain. She also finished second at Durango-Durango and Emakumeen Nafarroako. A win in Switzerland would be Ewers first WorldTour victory, but it is well within her capabilities.

The woman who bested Ewers in Italy, and who has been consistently at the top all season, is also a favorite for overall victory this weekend. Longo Borghini is flying. The Italian looked great at Worlds, but really has been performing all year. From winning Paris-Roubaix to finishing second overall at the Ceratizit Challenge by La Vuelta just a few weeks ago. Trek-Segafredo also has American Leah Thomas and world ITT champ on the startlist.

Another favorite hot off a fantastic performance at the Worlds is Liane Lippert. The German will be riding her final race for Team DSM before she makes the move to Movistar for the 2023 season. She was an animating factor in the road race in Wollongong and ultimately finished a respectable fourth. Her best stage race performance was second at the Tour of Scandinavia in August. Her teammate Juliette Labous is also one to watch out for. Labous won the Vuelta a Burgos earlier in the season, and also took the mountain top stage of the Giro Donne.

Speaking of the Tour of Scandinavia, FDJ-SUEZ-Futuroscope is bringing their two winningest riders in Cecilie Uttrup Ludwig and Marta Cavalli. Cavalli returned to racing just this week at Giro dell’Emilia for the first time since her horrendous crash at the Tour de France Femmes in July.

Uttrup was another contender for the World Championships and has continued to show incredible form since she took stage 6 of the Tour de France Femmes. Both riders could feature in the first two stages, although no pressure on Cavalli, we are all just happy to see the Italian back in the peloton.

SD Worx will start on Thursday with their standard crazy strong team. Demi Vollering, who wasn’t able to participate in the World Championships after testing positive for COVID-19 before the start, has her chance at revenge in Switzerland. She is backed by Ashleigh Moolman Pasio who featured heavily in a lot of the strong breakaway attempts in Wollongong, and Marlen Reusser.

In her last race for UAE Team ADQ before she makes the move to Liv Racing Xstra, Mavi García lines up as a favorite. The Spanish national champion is an incredible climber and does will in these shorter races.

Finally, according to the provisional start list, Annemeik van Vleuten will be showing off the Movistar version of her World Champion jersey. If the Dutchwoman is on the startline she will most likely win the overall, with a day like stage 2.

According to GCN, there will be live coverage of all three stages available, but the exact times are still unknown. Check back on Thursday for more detail. The race will also be on Eurosport.

Read More
Did you miss our previous article...
https://playeverysport.com/recreational-sports/report-finds-that-new-mexicos-elk-licensing-system-favors-wealthy-landowners-and-outofstaters-over-residents
finalracethewomen