|| The best winter trout flies will work on any streams in the country. Joe CermeleDepending on where you live and who you talk to,.. 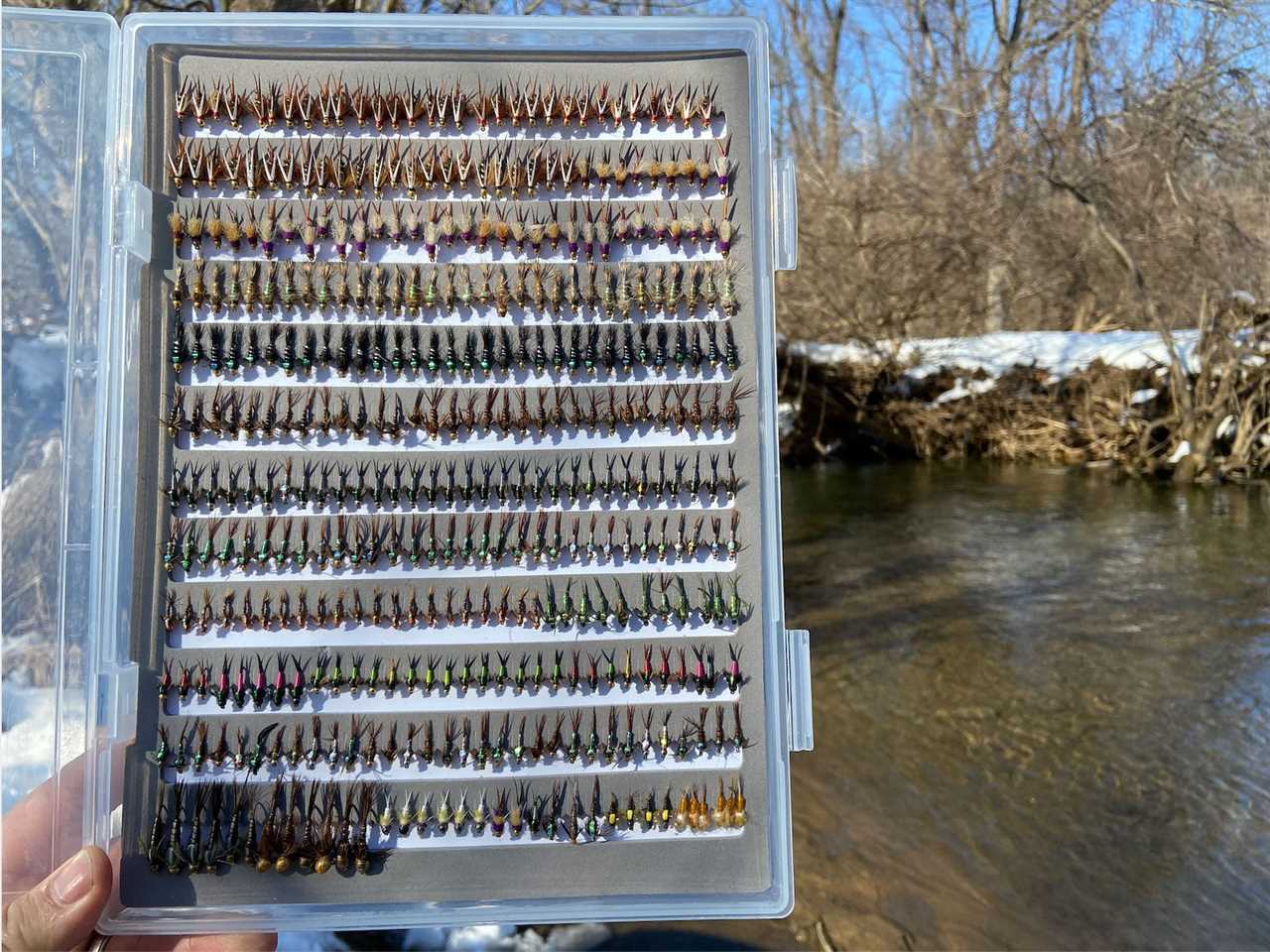 The best winter trout flies will work on any streams in the country. Joe Cermele

Depending on where you live and who you talk to, you’ll find that fly fishermen have widely varying opinions on hitting the river in the dead of winter. For some it’s the greatest time year, with fair-weather crowds long gone, “money” water wide open, and loads of unpressured fish to target. For others (myself included), while the solitude is a plus, catching winter trout takes perseverance. What many people don’t realize, however, is that it all boils down to understanding exactly which kind of river you’re fishing and using that knowledge to pick the best winter trout flies. 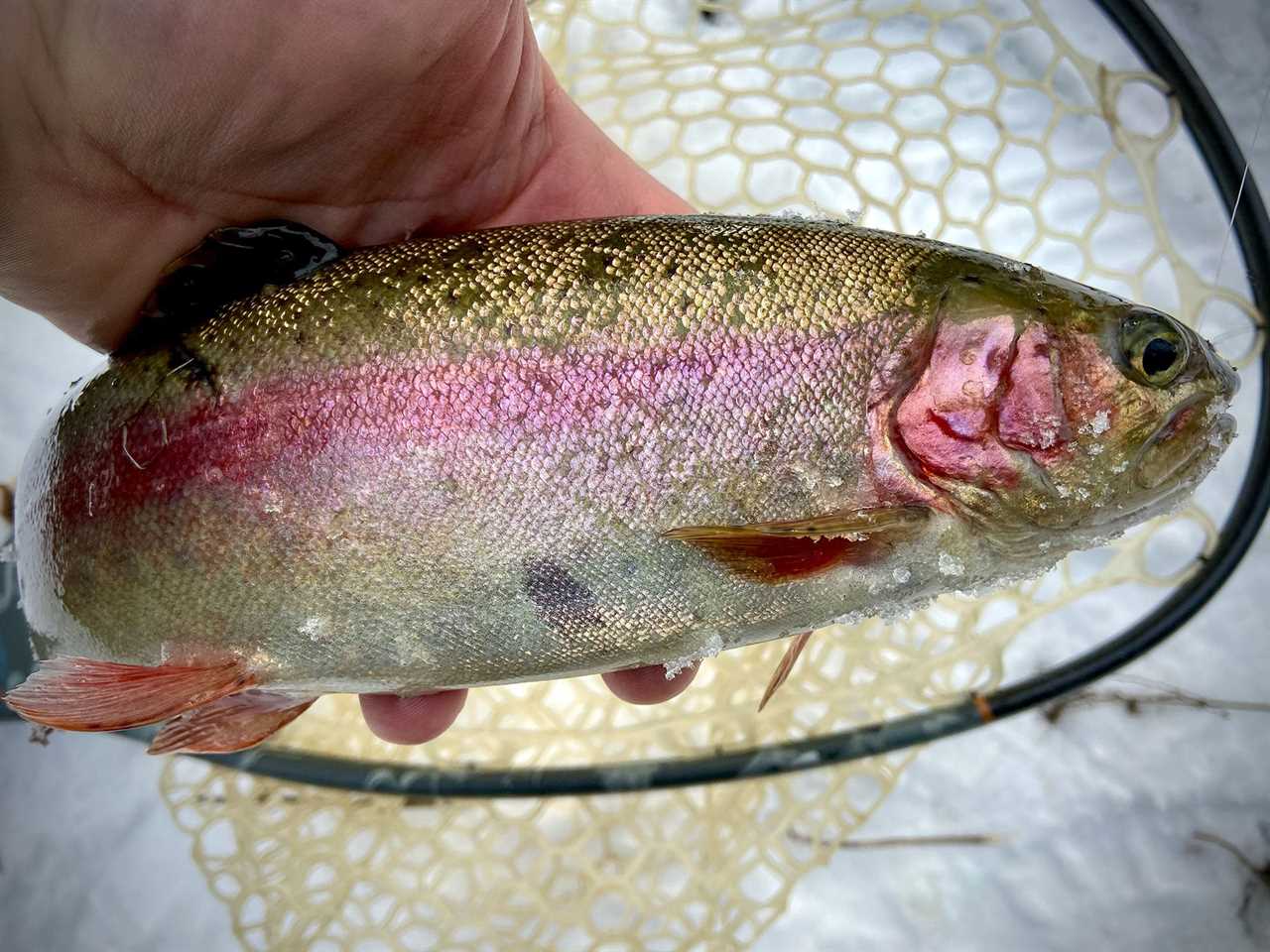 A tailwater river, as an example, can only get as cold as the water at the bottom of the reservoir that’s feeding it, which means even if the air is well below freezing, the water will be much warmer. Likewise, limestone spring-fed rivers rarely dip below 42 degrees regardless of air temperature. But if you’re stuck fishing predominantly freestone rivers like I am with flows heavily influenced by run-off and snow melt, they can reach near freezing temperatures, which makes fishing tough.

The bottom line, though, is that regardless of the kind of river you’re fishing, trout do remain active all winter. So, if you’re itching to base layer up and grab a wool hat to get after them on the fly, here are four of the best winter trout flies that will produce in any river in the country. 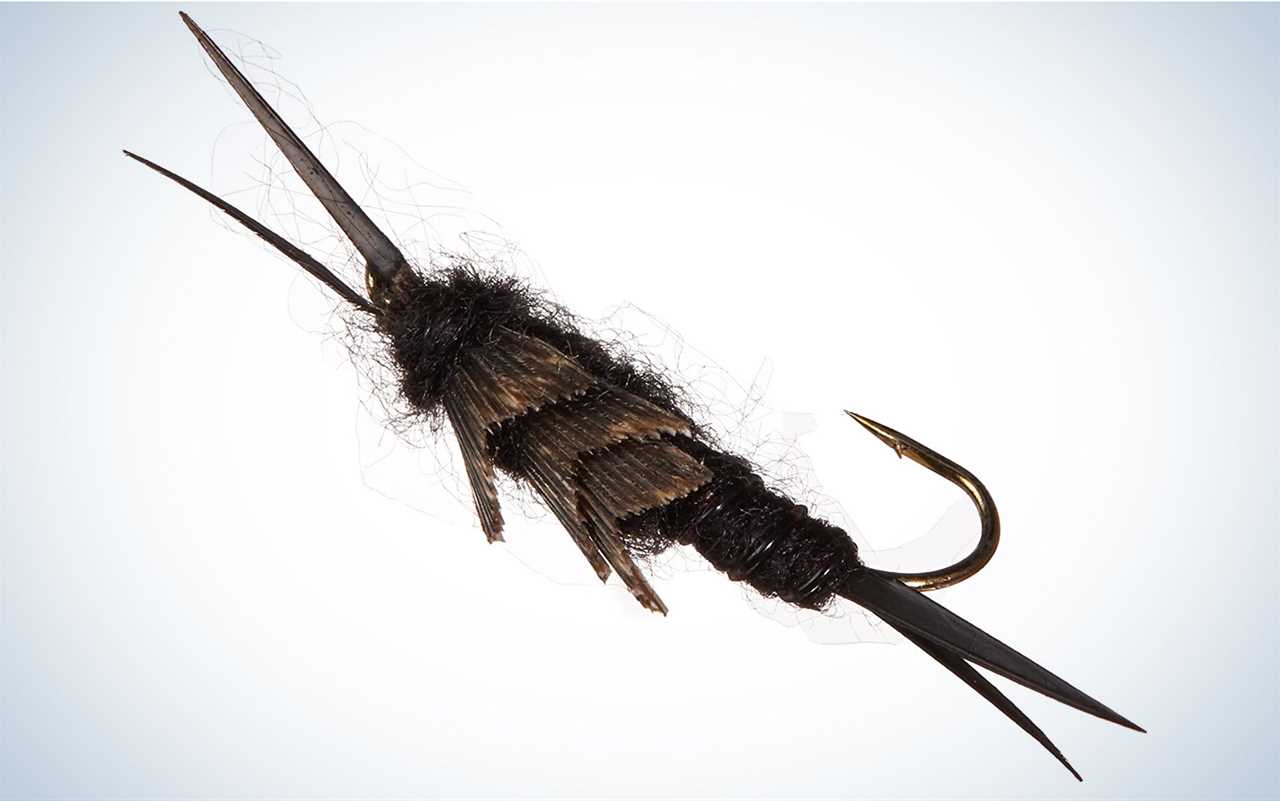 It’s common knowledge that trout eat a lot of bugs, both the waterborne aquatic variety and terrestrial based crawlers like ants and grasshoppers. The vast majority of these food sources are only available spring through early fall in most of the country, but just because the mercury plummets doesn’t mean all the bugs disappear.

Most rivers throughout the country experience a hatch of winter black stoneflies. These bugs often emerge from the bottom on those oddball days when the air warms above normal winter temperatures and the sun is shining. It’s not uncommon to see them crawling around on the snow along the bank. The cool part is, whether you’re fishing during a big stone hatch or not, trout will key in on these jet-black bugs. Most of the time they’re very tiny, so make sure to carry stonefly patterns or nymphs like a black hare’s ear in sizes 16 to 20. Swing them through tail-outs on warmer days, or dredge them through deep, slow holes on those frigid overcast days. 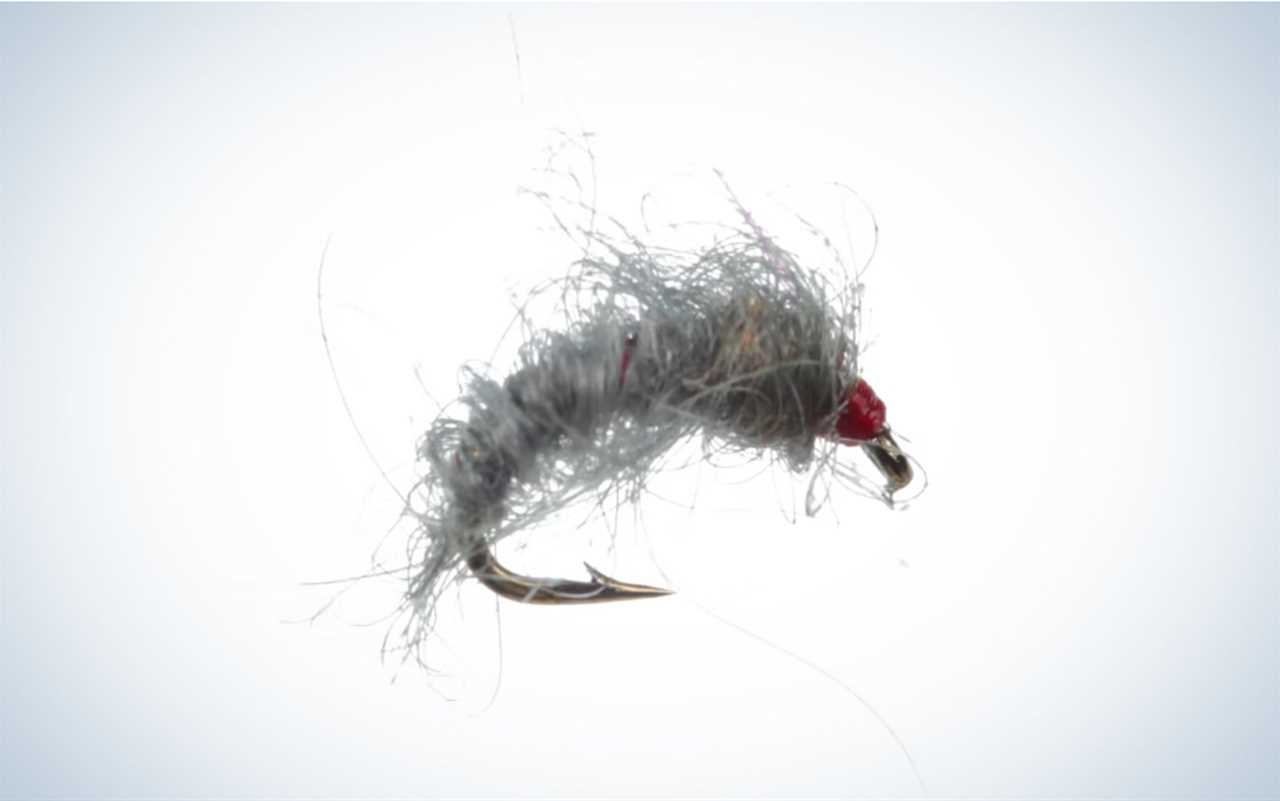 Scuds are tiny freshwater shrimp, and while almost every river in the U.S. has a population of them, they are especially prolific in spring fed rivers with lots of aquatic vegetation. Trout eat these crunchy morsels year-round, but when winter limits menu options, scuds bump to the top of the list.

Scud coloration will vary from river to river, with brown, tan, and olive being the most widely found natural colors. You can, however, find scud flies in many colors, as some anglers feel that a scud in, say, neon orange or hot pink will stand out better and get noticed by sluggish trout faster. Regardless the scud you choose, treat it like any other nymph. Focus on the low ends of riffle pools where trout might be waiting for scuds that have been flushed from under upstream rocks to drift by. In shallower water, try swinging a weightless scud just below the surface on a tight line so you can feel subtle takes.

The wooly bugger is one of the most versatile and proven flies ever created, and it’s also one of the best winter trout flies. Depending on the color, they can mimic anything from a baitfish to a crayfish to a leech. All color of wooly bugger can score during the colder months, but black arguably shines above all others.

Part of the reason black stoneflies produce so well in winter is because the shorter days produce less direct sunlight. In these low light conditions, contrast matters, so trout will pick out dark flies faster than light colored ones this time of year. When dead drifted, a black bugger represents a bigger-than-average black stonefly, which will sometimes appeal to the heaviest trout in the hole that would rather munch one large meal than keep picking off little crumbs. On warmer days, you can also strip a black bugger to present a moving target, potentially triggering an mostly lifeless brown into snatching a quick bite. 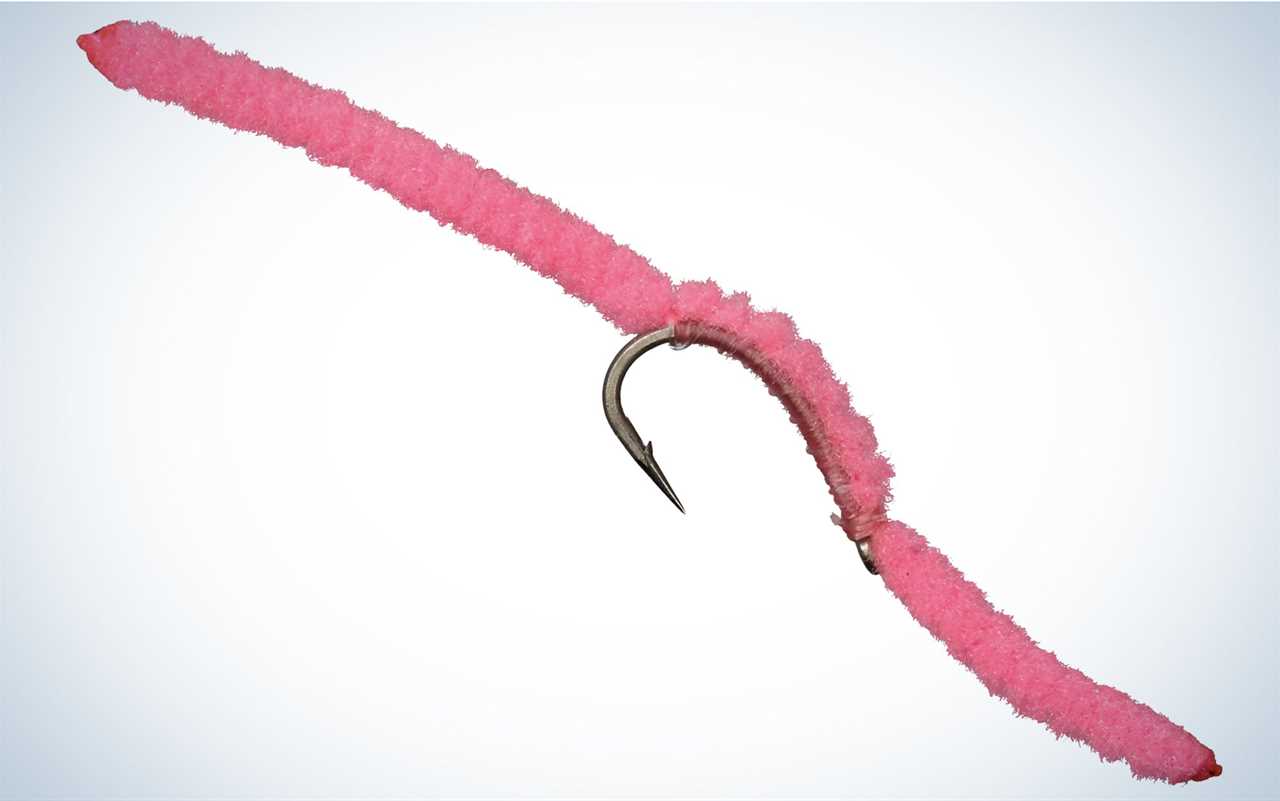 We love to pretend trout are always these smart, snobby, selective creatures with very refined palates. No doubt, sometimes that’s exactly what they are, and you’ll pull your hair out trying to match the specific bug they’re eating. At the same time, trout—like most freshwater fish—recognize a worm as something good to eat, which is why the San Juan is so potent in winter.

Drift a red, pink, or brown San Juan in any trout river between November and March and you’re likely to find a fish or three willing to slurp it up. When pickings are slim this time of year, the average trout isn’t going to let that protein slip by. San Juan Worms—and their cousin the Squirmy Worm—can be so lethal that some fly anglers consider them cheating. The way I look at it, though, is that if I’m going to freeze my butt of flyfishing in February, I’m not doing it to enjoy the scenery. I want the pay out, so I’ve always got some worms (as well as the other best winter trout flies) on hand to drift through soft seems and slow stretches where I know trout stack in winter.