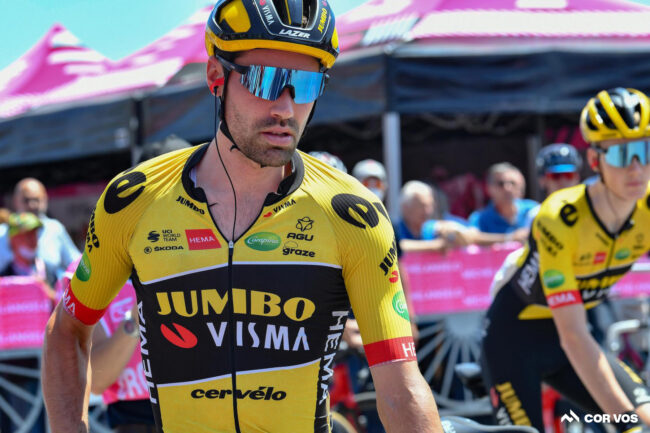 Tom had been struggling with his physical condition for several days. pic.twitter.com/myqWxedgyG

After a challenging few years, Dumoulin started 2022 with designs on Grand Tour leadership with Jumbo-Visma, but he came to the 2022 Giro with question marks over his form. After a bitterly disappointing second place behind Simon Yates in the stage 2 time trial, the 2017 Giro champion was dropped a few days later on Mount Etna. He finished 9:10 after the stage winner in 53rd, putting an end to any general classification hopes.

After a few days to recover, the Dutchman’s Giro took a turn for the better on stage 7 when he got into the successful breakaway with teammate Koen Bouwman. As the group broke up towards the finale, Dumoulin was instrumental in setting up his young teammate’s first ever Grand Tour stage win, and with it, the blue mountains classification jersey.

Dumoulin was setting his sights on stage glory himself going into this weekend’s stages, but he’d also told media he’s been nursing a back injury.

“I haven’t felt great since the start of the Giro, but hopefully things will get better,” Dumoulin told Cycling Pro Net before Saturday’s stage. “I’m still hoping for my chances. We will try to take it, as we did with Koen Bouwman.”

Stage 14 started under a beating sun, temperatures expected to exceed 33°C during the afternoon, and the first hour was particularly aggressive as teams fought over tickets for the breakaway. Dumoulin was seen in a small group off the back of the peloton early on, and he subsequently pulled the plug with about 100 km left to race.

He joins the growing list of withdrawals from the Giro, including stage 14 non-starters Giacomo Nizzolo (Israel-Premier Tech), Cees Bol (DSM) and Alexander Krieger (Alpecin-Fenix), and GC contender Romain Bardet (DSM) who was forced to climb off yesterday.