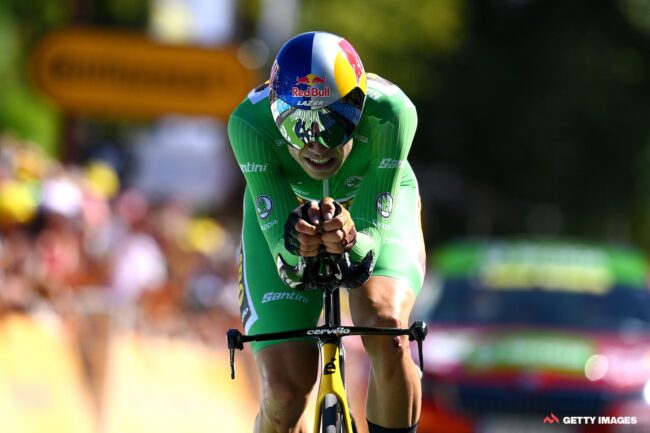 A couple of the specialists who were expected to perform on the wearing 40-kilometre test, including stage 1 winner Yves Lampaert (Quick-Step Alpha Vinyl) and young Swiss TT phenom Stefan Bissegger (EF Education-EasyPost), wore the effort of 19 days of hard and fast racing throughout the time trial, both arriving in Rocamadour over four minutes slower than the provisional best time. The early benchmark was set by Mikkel Bjerg (UAE Team Emirates), 11th off the ramp, but he was inevitably usurped by Filippo Ganna after 45 minutes keeping the hot seat warm.

The next and most serious challenger was Wout van Aert, winner of the stage 20 time trial in 2021, and already bringing two stage wins with him from earlier this Tour, not to mention impeccable team duties on all terrain. He was four seconds faster at the first checkpoint, 24 at about halfway, and then he seemed to give himself a bit of time to recover, losing a second before the hilly portion to the finish. He was a massive 42 seconds faster than the world champion over the line.

The GC race came next, and it being the longest TT at the Tour in eight years, there was likely to be at least a little movement, it was just a question of who and where.

After Van Aert’s performance, it seemed safe to assume that the race for the stage was now for the minor placings, but the top three on GC would not make it easy. All three screamed through the first timing point, plus or minus a second or more of the mark set by the green jersey. Resplendent in yellow, Vingegaard, incredibly, set the fastest time at all three time checks, even faster – I’ll remind you – than both his teammate and the TT world champion.

With Pogačar shedding time and Thomas plugging away, Vingegaard’s time was still green as he hit his favoured terrain – the lumpy last quarter – but there were just a few seconds in it. Then a nervy moment on the descent before the final climb seemed to make him check himself, and he had clearly conceded by the top, where he sat up a little, shaking his head in disbelief as his achievement began to bed in, his teammate and stage winner, Wout van Aert, waiting for him beyond the line.

Vingegaard was second on the stage and Pogačar third eight seconds down, which confirms overall Tour de France victory for the Dane by a margin of 3:34.