||Cristiano Ronaldo doing his signature celebration after he gave Portugal the lead from penalty against Ghana in Group H clash of FIFA World Cup.. 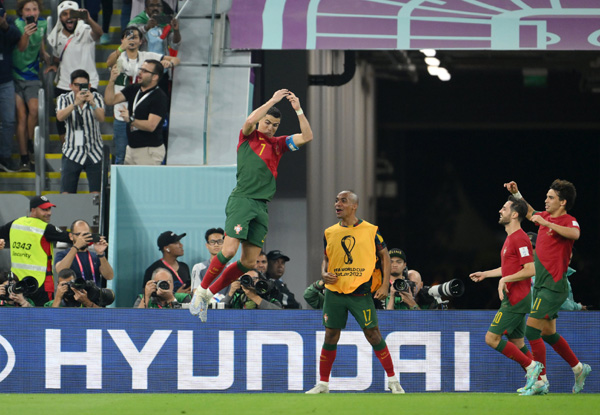 Cristiano Ronaldo doing his signature celebration after he gave Portugal the lead from penalty against Ghana in Group H clash of FIFA World Cup 2022 at Stadium 974 on Thursday. Image Source: Twitter

Xtra Time Web Desk: Portugal superstar Cristiano Ronaldo added another milestone to his illustrious career as he became the first footballer to score in five World Cups. Ronaldo scored from penalty as Portugal secured a thrilling 3-2 win over Ghana in Group H encounter at Stadium 974 on Thursday night. The match saw five goals being scored in the second half with Joao Felix (78’) and Rafael Leao (80’) also on target for Portugal while Andre Ayew (73’) and Osman Bukari (89’) scoring for the African nation.

It was Portugal who took the lead in the 65th minute after Ronaldo was fouled inside the box by Mohammed Salisu. The talisman converted from the spot to take his tally to 118 goals for Portugal.

Ghana equalised in the 73rd minute against the run of play when Andre Ayew fired home from close range. Portugal immediately responded with quickfire goals from Joao Felix (78’) and substitute Rafael Leao (80’).

Portugal had to survive a nervy final moments after Osman Bukari headed home Ghana’s second goal (89). Ghana had a golden opportunity to level in the 10th minute of stoppage time when Inaki Williams caught Portugal goalkeeper Diogo Costa unawares to steal possession in the box, but the forward lost his footing at the crucial moment, allowing Portugal to emerge victorious.

The victory sends Portugal top of Group H ahead of their meeting with Uruguay on Monday.

Earlier in the day Uruguay were held to a goalless draw by South Korea.