||Xtra Time Web Desk: It has been a World Cup of upsets so far in Qatar. After Saudi Arabia’s comeback win over Argentina on Tuesday, another Asian.. 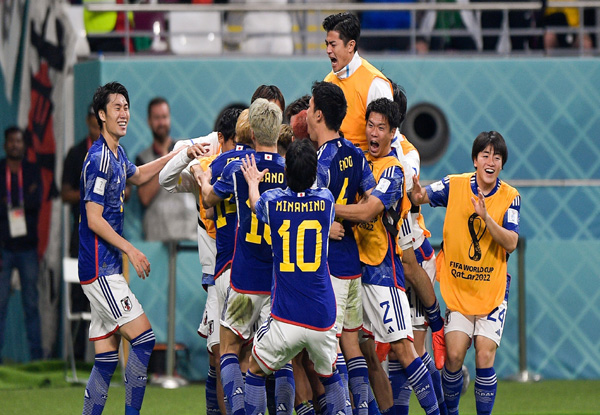 Xtra Time Web Desk: It has been a World Cup of upsets so far in Qatar. After Saudi Arabia’s comeback win over Argentina on Tuesday, another Asian giants Japan stunned four time World Champions Germany 2-1 in Group E clash of FIFA World Cup 2022 at the Khalifa International Stadium.

It was Germany who took the lead through Ilkay Gundogan in the 33rd minute from a penalty. Ritsu Doan equalized for Japan in the 75th minute while Takuma Asano scored the winning goal for his side in the 83rd minute. This is the first time Japan has won a match in FIFA World Cup after conceding a goal. Both Doan and Asano came in as substitutes and played a part in Japan’s memorable victory.

Japanese goalkeeper Shuichi Gonda was easily the star of the match as he was like a wall under the goal post. Gonda made up for his first half mistake to give away a penalty as he made several big stops in the second half and Germany’s slack finishing gave Japan the chance to get back into this game. They made the most of Germany’s defensive errors and pressed so high early on and then late on and Germany just couldn’t handle the pressure Japan put on them.

This was the first time since 1978 that Germany lost a World Cup game in which they were leading at half time. Hansi Flick’s will play Spain next, while Japan face Costa Rica.