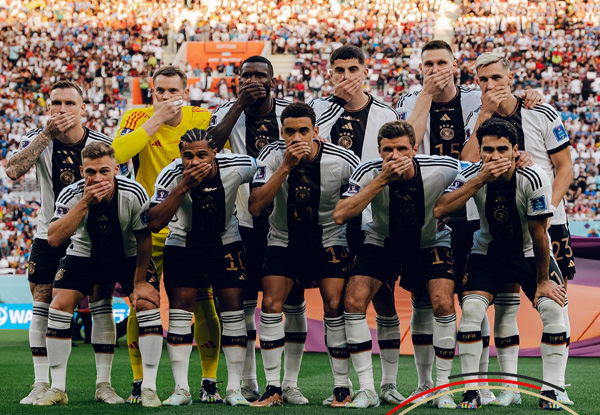 Xtra Time Web Desk: The Germany football team led by Manuel Neuer showed a unique protest ahead of Group E match against Japan in the ongoing FIFA World Cup 2022. The entire team decided to cover their mouths while posing for group photograph, as a mark of silent yet strong protest against the governing body of world football.

“We wanted to use our captain’s armband to take a stand for values that we hold in the Germany national team: diversity and mutual respect. Together with other nations, we wanted our voice to be heard,” read a statement released by the German FA on Twitter.

It wasn’t about making a political statement – human rights are non-negotiable. That should be taken for granted, but it still isn’t the case. That’s why this message is so important to us.

Denying us the armband is the same as denying us a voice. We stand by our position. pic.twitter.com/tiQKuE4XV7

German Interior Minister Nancy Faeser, who was at the stadium for the match against Japan made sure someone in the stadium wore the One Love armband. She sported a One Love arm band and took a seat beside FIFA President Gianni Infantino.

The DFB have also said it is considering legal action over the issue.

German midfielder Joshua Kimmich admitted that it had crept into dressing room adding that the side “are very reflective and point the issues out.”