Xtra Time Web Desk: Reports and videos of ticketless English fans trying to gain access to Wembley stadium, trash being thrown on the streets at.. 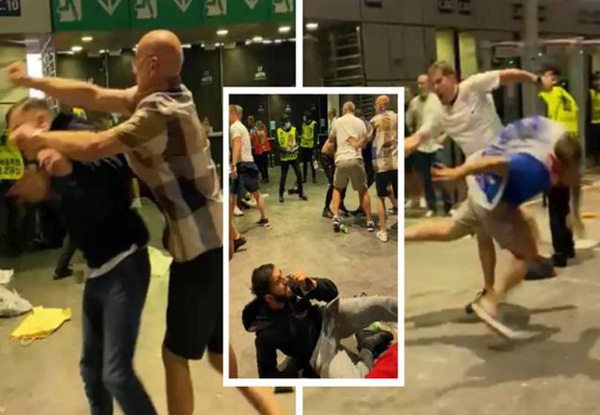 Xtra Time Web Desk: Reports and videos of ticketless English fans trying to gain access to Wembley stadium, trash being thrown on the streets at Leicester Square, Italian fans being beaten at the stadium made headlines after the Euro 2020 final between England and Italy on Sunday.

Metropolitan Police have already made 49 arrests as part of policing operation for Euro 2020 final. A spokesman at Wembley also confirmed a “small group” of ticketless fans breached security and gained access into the stadium before the 8pm kick-off on Sunday.

Footage also emerged in the hours before England’s penalty shootout defeat by Italy of disorder in Leicester Square.

In a statement released after the match, Met Police said: “Thank you to the tens of thousands of fans who had good spirits and behaved responsibly. We made 49 arrests during the day for a variety of offences. We will have officers on hand throughout the night.

“Frustratingly, 19 of our officers were injured while they confronted volatile crowds. This is wholly unacceptable. A big thanks to officers across London and our blue light colleagues for their part in keeping Londoner’s safe and moving tonight.”

A FA spokesperson said in a statement: “These people are an embarrassment to the England team and to all of the true fans who wanted to enjoy one of the most important matches in our history.

“We will work with the relevant authorities to take action against anyone who is identified to have illegally forced their way into the stadium.”

This is why i’m happy that England lost. #englandfans #England #Wembley pic.twitter.com/dyfP6q6HqV

So these bunch of wankers are trying to storm Wembley

Yup you guessed it, #EnglandFans

The world are watching these fucking drunken idiots!#JohnsonVariant

The prime minister said #EnglandFans can be trusted to be sensible

Fucking useless, he knew these thugs ruin everything, act like entitled arseholes & don’t give a flying fuck.