Why Rohit Sharma-Rahul Dravid wants to see Virat Kohli in this role in T20 format? 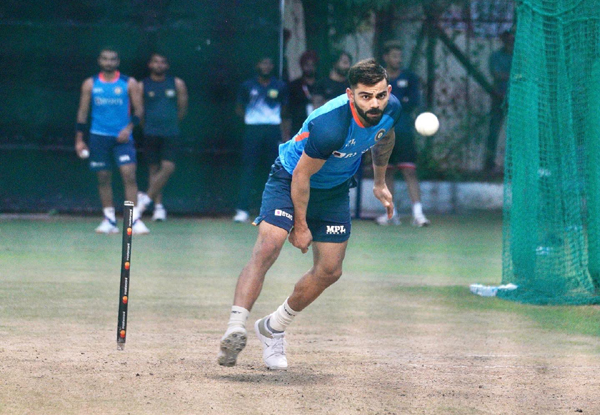 Virat Kohli rolling his arms at the nets on Monday. Image Courtesy: PCA

Xtra Time Web Desk: Virat Kohli was seen bowling at the nets on Monday for almost 30 minutes in front of Head Coach Rahul Dravid. It seems like Virat is being looked as a bowling option in the shorter format leading up to the T20 World Cup. That will add more flexibility to the side.

Virat was seen batting at the nets on Monday for about an hour. He took and break and again entered the nets to take throwdown. But the real surprise for everyone observing the net session arrived when he was seen with a ball. He was seen in a jovial mood, cracking jokes with Hardik Pandya. After all this, he still had the energy to take part in a fielding drill.

As far as Kohli bowling at the nets is concerned, it is nothing new. He has bowled in the nets on previous occasion as well. Virat has also bowled in matches as well. He recently bowled an over in the game against Hong Kong during the recently concluded Asia Cup 2022 in Dubai.

If Kohli can bowl a couple of overs that will be extremely handy for the team. It will allow the team management to have more bowling options.

Virat is seen as the third opener in the T20 side for upcoming T20 World Cup along with Rohit Sharma and KL Rahul. He bounced back to form in the recently concluded Asia Cup 2022 where he was the second highest scorer in the tournament. The 33-year-old scored 276 runs in five games including a hundred which was his 71st in International cricket.

The post Why Rohit Sharma-Rahul Dravid wants to see Virat Kohli in this role in T20 format? first appeared on XtraTime | To get the best and exclusive sporting news, keep watching XtraTime.||