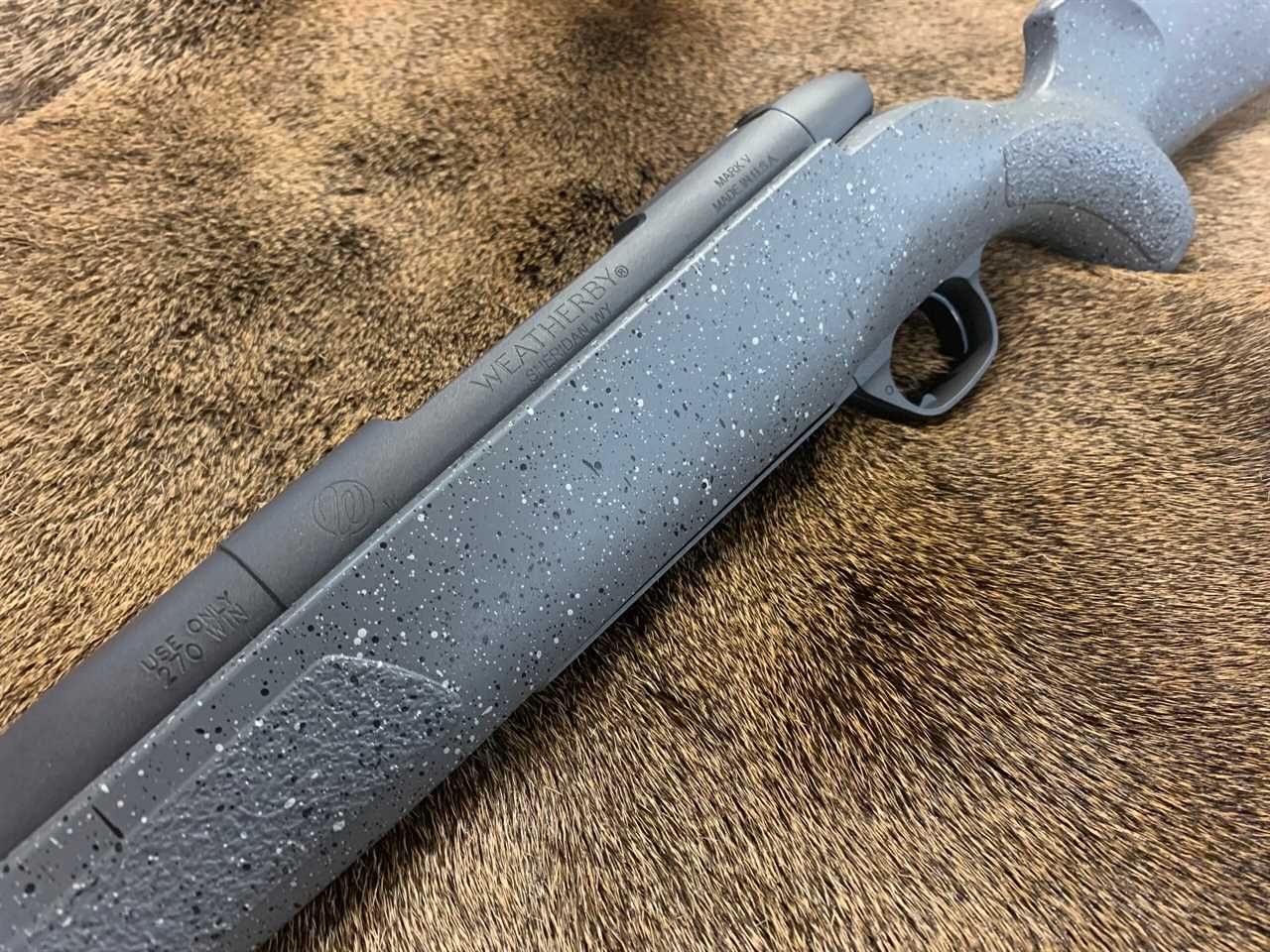 Introduced in 1957, Weatherby Mark V is one of a few sporting rifles to have been continuously produced for over half a century and maintain premier status. The Mark V has been the flagship rifle for Weatherby since that time, and has an excellent reputation for accuracy, reliability, and for featuring an ultra-strong action. Although the heart of the Mark V (its action) is mostly the same, Weatherby has continuously updated the platform. Recent notable additions to the Mark V line are the Mark V Backcountry Ti and Backcountry 2.0 (that we featured in our 2022 rifles test). Another introduction (albeit lower profile) in late 2021 was the Mark V Hunter. The Hunter is the most affordable rifle in the Mark V family and is a great value for a high-quality gun. 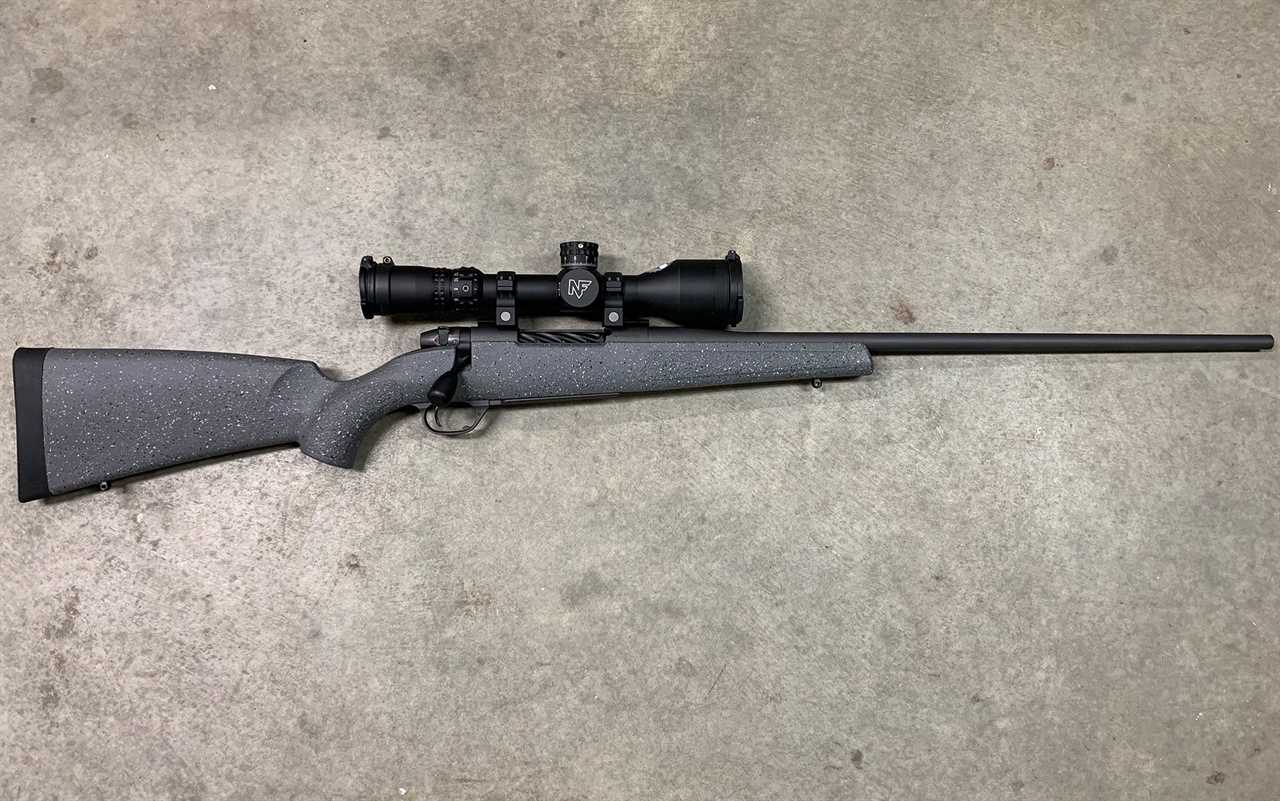 Nuts and Bolts of the Weatherby Mark V Hunter

At its core, the Mark V Hunter is simply a Mark V. If you’ve got a history with Weatherby rifles, you know what that means. For everyone else, the Mark V action is an extra-strong push-feed design that’s characterized by either six or nine lugs (depending on action size), and an ultra-short 54-degree bolt throw.

Unlike some other actions, the lugs on the Mark V are small. It’s common to see two- and three-lug push-feed actions, but the lugs usually protrude beyond the outside dimensions of the bolt and slide to and fro in raceway channels cut into the receiver. The Mark V’s locking lugs are more like sections of screw thread. Their outside diameter matches the overall bolt diameter, and the front portion of the bolt is machined to a smaller diameter to allow for this. Nine-lug actions have three rows of three lugs, and six-lug actions have two. The bolt face is recessed, cupping the case head, and when locked up, it’s a strong connection. 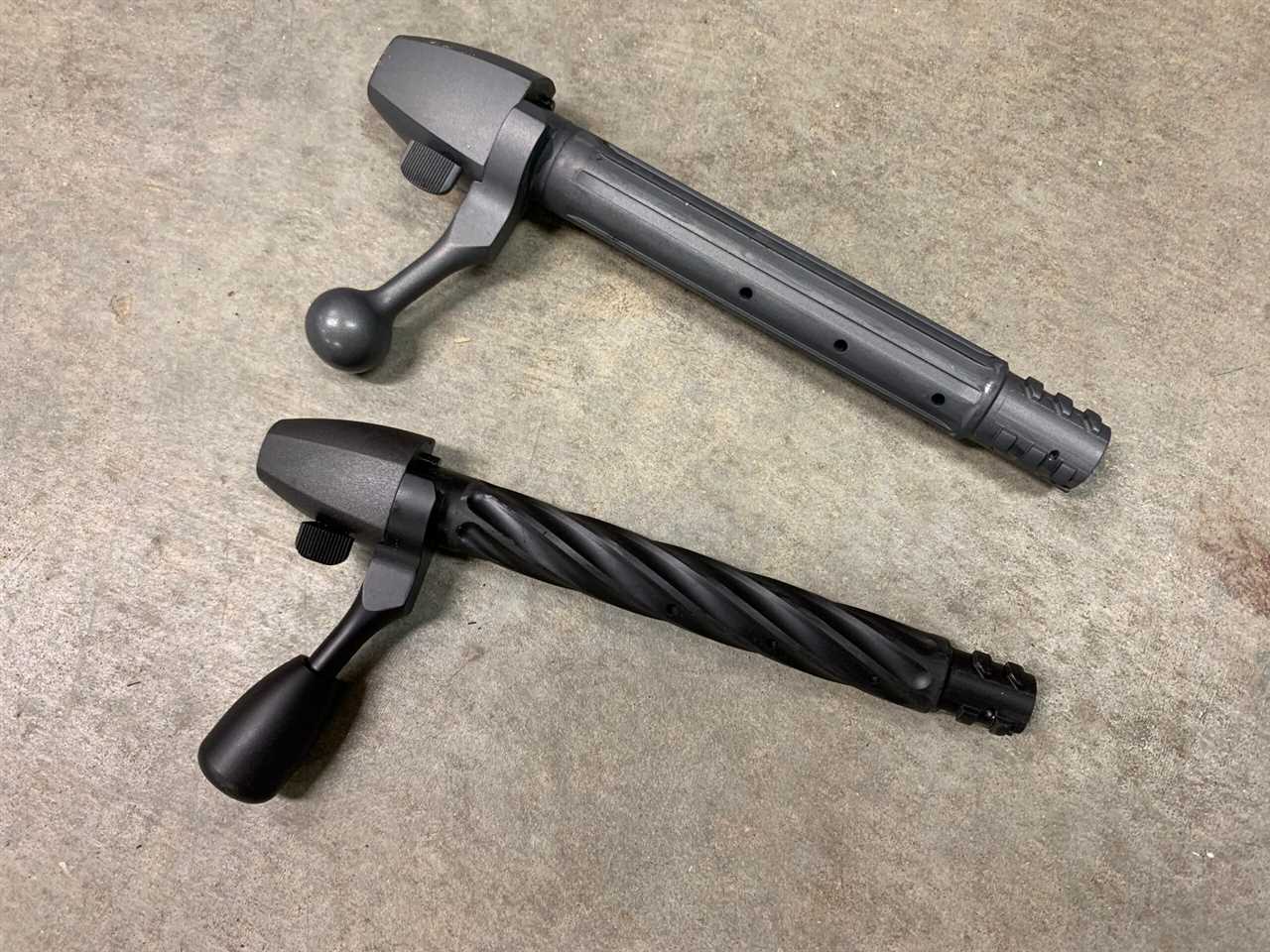 The Mark V Hunter has a fluted bolt, and the six-lug version is much more slender than the nine-lug. Tyler Freel

The most notable difference between the two actions is the weight. The nine-lug action is a beast. It’s built to handle the high-pressure Weatherby Magnum cartridges, and the rifle weighs over a pound more. The six-lug .270 I tested was relatively light, handy, and comfortable to carry. It’s also excellent in a cartridge like the 6.5 Wby. RPM. The bolt is fluted, and the bolt body and over-sized handle are finished with black Cerakote. The action body and bottom-metal are finished in Cobalt Cerakote.

The Mark V hunter uses a TriggerTech trigger that’s externally adjustable—but you probably won’t need to touch it. Mine came set at just over three pounds and it breaks wonderfully.

My Mark V Hunter sample in .270 has a 24-inch barrel that’s finished in Cobalt Cerakote. It’s a lightweight, No. 1 profile barrel with no fluting. It’s slightly heavier than the Mark V Backcountry steel barrels. It has a 1:10-inch twist, and a nicely protected, recessed target crown. The muzzle is threaded in 1/2-inch x 28 pitch for the use of a brake or suppressor and comes with a thread protector.

A suppressor is often a great accessory for hunting but note that a heavy suppressor will likely cause a major shift in this rifle’s point of impact—simply because the barrel is so thin. A dedicated-purpose lightweight suppressor like the titanium AB Raptor would be ideal for this rifle. 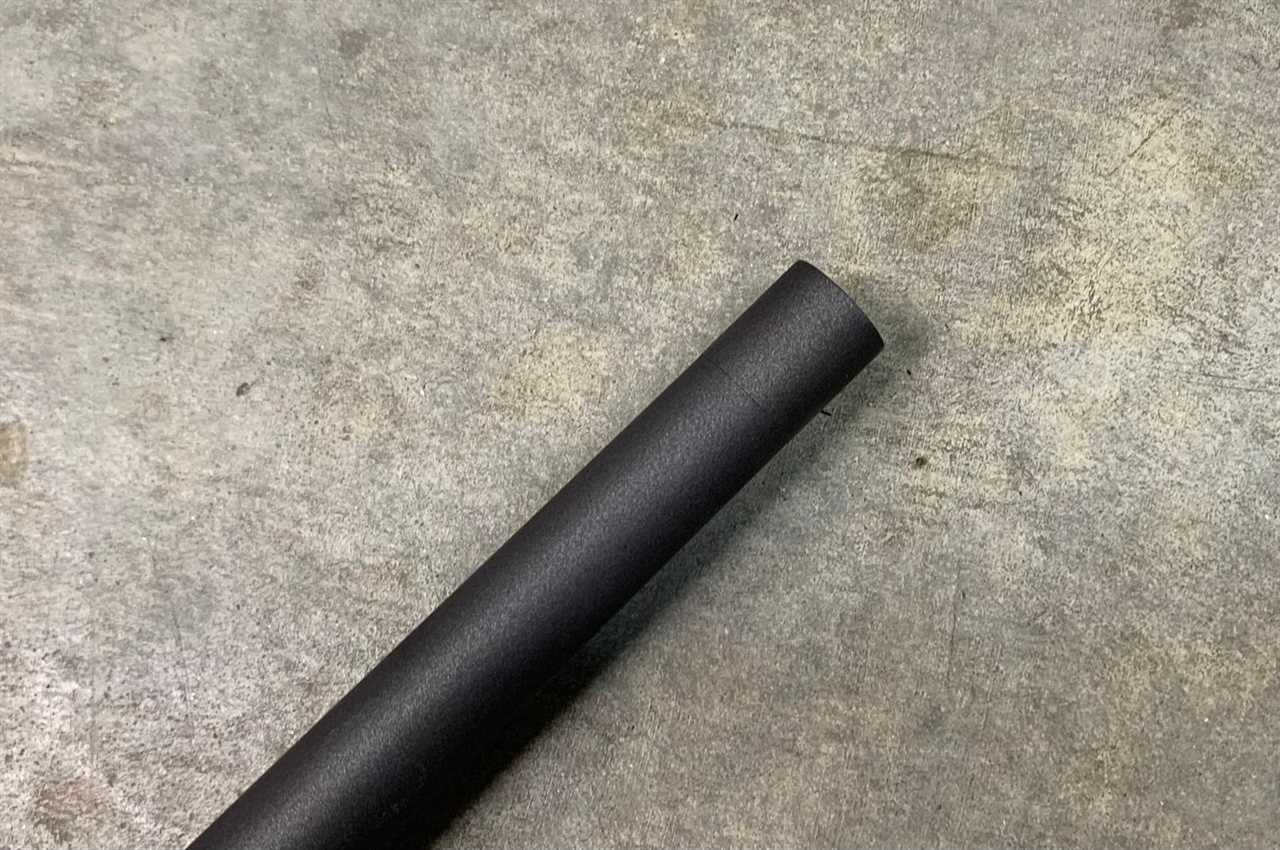 One departure that the Mark V Hunter makes from the traditional Mark V line is with its stock. The Mark V Hunter has what appears to be an injection-molded polymer stock, rather than the foam-core composite stocks that other models like the Mark V Weathermark have. It’s comfortable and solid-feeling, with a stiff fore-end. Some molded polymer stocks have a hollow sound and feel to them this one doesn’t. This stock has nice, molded texturing on both the grip and sides of the fore-end. It has a simple but nice paint job. The gray stock is dappled with pale gray and black droplets that I like—but it does look a bit like the hardware store “roll-and-sprinkle” garage floor finish.

The stock has the classic Weatherby fore-end that terminates with a distinct corner. The butt of the stock, however, lacks the typical Monte-Carlo-styled cheek piece. It’s shaped like the stocks of the Mark V Backcountry rifles and features a gently curved reverse comb. With this profile, the top of the stock isn’t slammed into the shooter’s cheek with heavy recoil.

A feature that shooters might like is the grip, which has a fat palm swell and lines the hand up nicely for finger placement on the trigger. The flutes of the stock (just above the grip and in front of the comb) are deep, and allow the shooter to lay their thumb comfortably along the top of the wrist and alongside the tang. Grip profiles like this allow for a consistent, relaxed trigger pull, and quicker access to the bolt than wrapping the thumb around the back of the stock. You’ll see grip profiles like this on hunting rifle stocks like the Gunwerks, ClymR, and others. 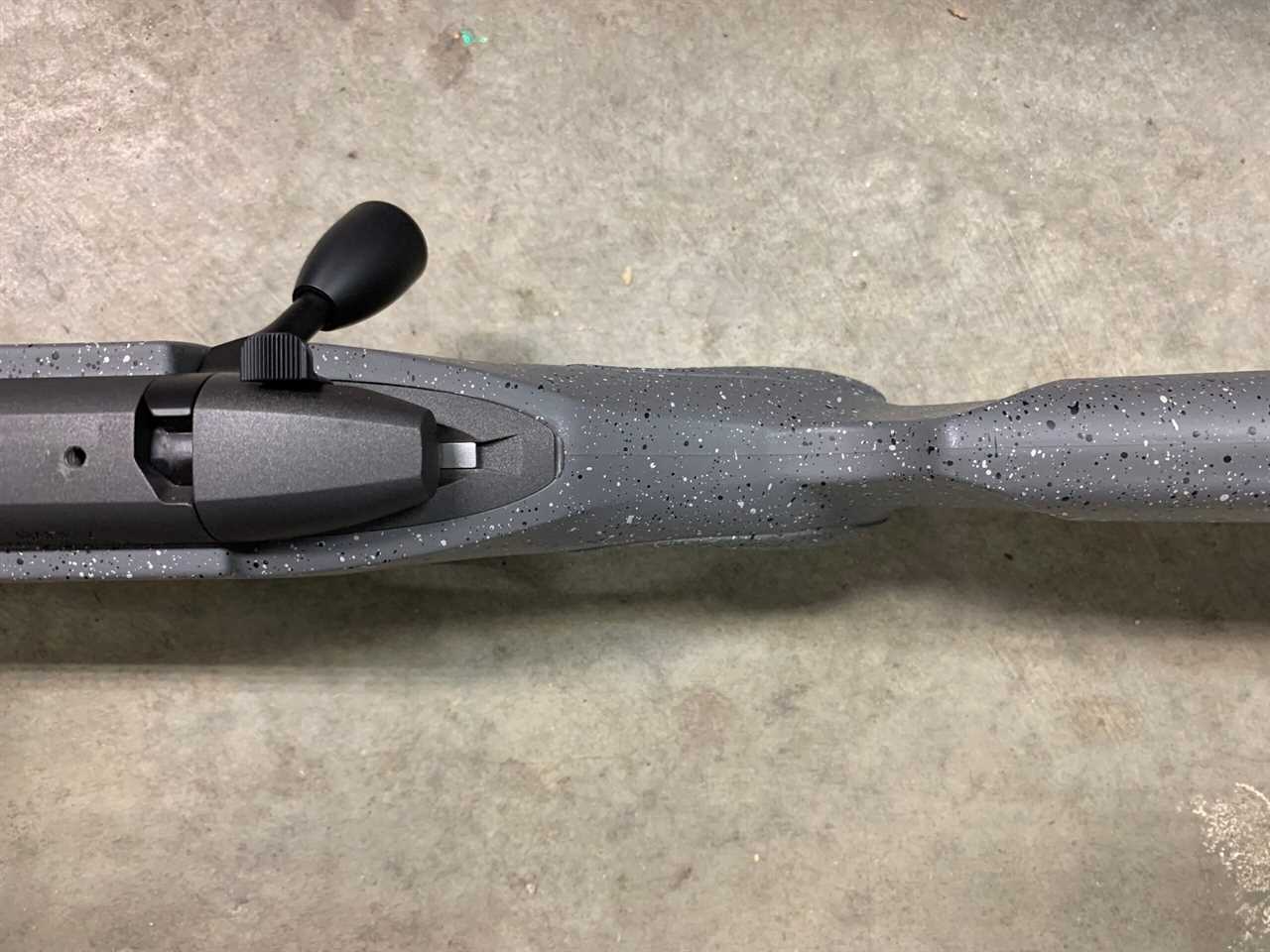 The grip of the Mark V Hunter’s stock has a nice palm swell and deep flutes for comfortable hand placement. Tyler Freel

Some Weatherby Mark Vs are fully bedded or feature bedding blocks. The Mark V Hunter doesn’t, but it does have aluminum bedding pillars and some glass bedding around the recoil lug and front action screw. The barrel on my sample is floated almost all the way back to the action. The barrel on my sample favors to port and doesn’t sit quite evenly in the stock’s barrel channel, but it doesn’t make contact.

I’ve read feedback from customers who have had the barrel contacting one side or other of the stock, but I think it could simply be an issue of making sure it’s lined up correctly before torquing the front action screw. It’s a detail that Weatherby lays out in their user manual, and it does seem to make a difference.

Overall, the metal-to-stock fit is great for a drop-in polymer stock. There is no visible gap or slop between the receiver and stock on top, even around the tang. There is a small bit of excess space at a couple spots around the bottom metal, but that’s just a nitpick. 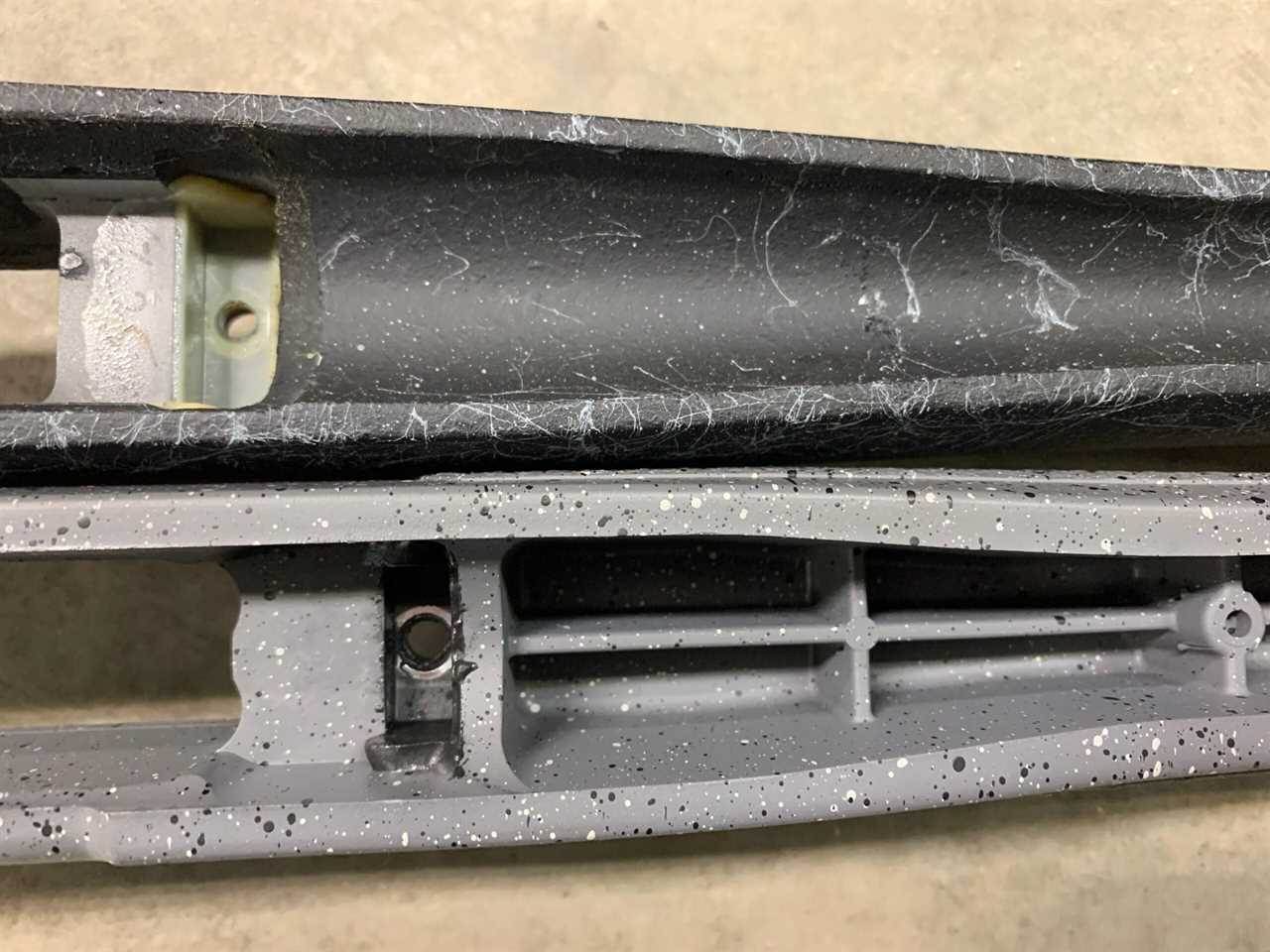 The Mark V Hunter (bottom) has a more affordable molded stock, but it’s stiff and has bedding pillars and some glass bedding around the recoil lug. Tyler Freel

I found the Mark V Hunter to be comfortable to carry and snappy to shoot and operate. I like the ergonomics of the Backcountry 2.0’s stock, and I think they were wise to mimic its ergonomics in a more affordable option. The six-lug action .270 is light, but solid on the shoulder. I think that’s where this rifle really shines, and it would be an excellent field rifle in this class of cartridge. Based on the feel of my larger, heavier, nine-lug Mark V Weathermark, I think that I’d recommend sticking with the six-lug. It strikes a sweet balance between strength and finesse.

The grip allows a relaxed and repeatable trigger pull and I’m a fan of the reverse comb on the stock. The throw on the bolt is short, and it allows you to cycle quickly and with authority. With the two Cerakote finished of the receiver and bolt bearing on one another, the bolt can feel a little sticky when it’s dry. A bit of oil helps smooth it out, but it’s not going to feel like a well-worn steel-on-steel action. 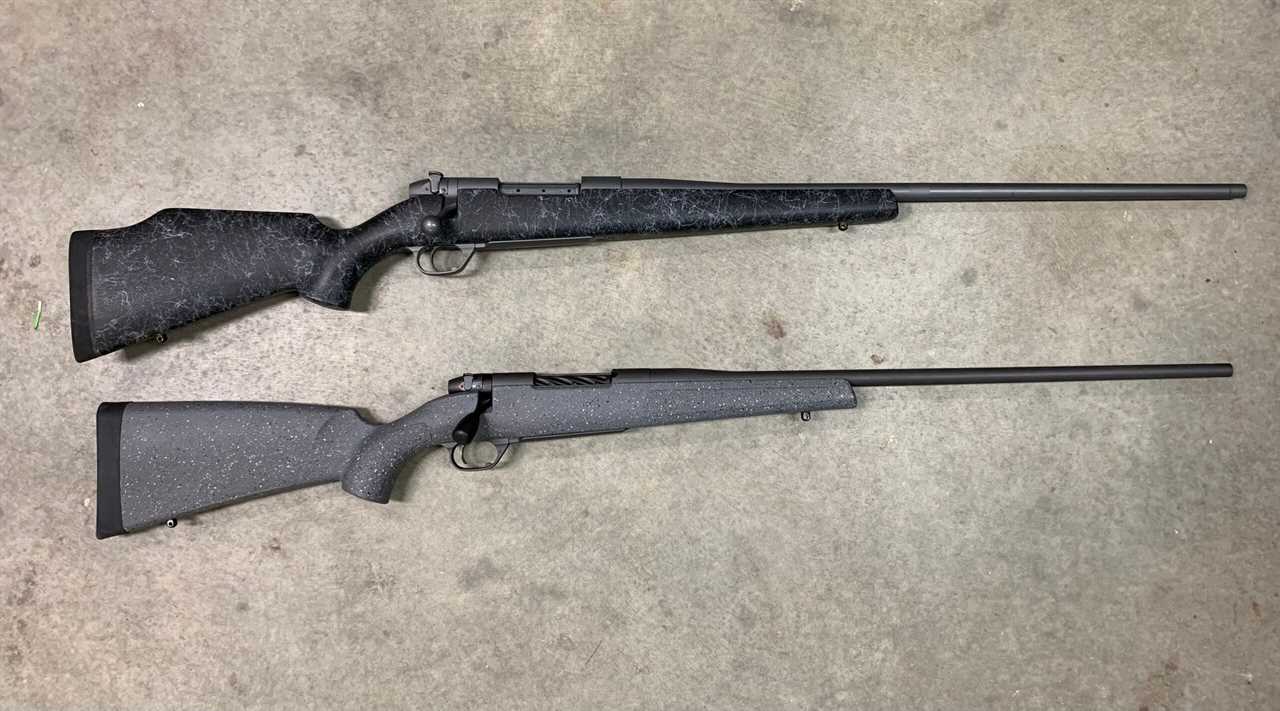 The Mark V Hunter has a distinctly different stock design than the Mark V Weathermark (top) and others. Tyler Freel

Like the rest of its lineage, the Mark V Hunter comes with Weatherby’s three-shot MOA accuracy guarantee. I spent a lot of time shooting this rifle and recorded 34 five-shot groups. We have a high standard when it comes to accuracy testing for rifles with factory ammo, and we use five-shot groups, not three. For accuracy scores, I have two numbers. First, the average group size of the top ten groups the rifle fired. This gives us a good idea what kind of accuracy the rifle is capable of repeating. Second, the overall average group size gives a realistic picture of the type of accuracy you can expect across a variety of ammunition.

Average of All Five-Shot Groups: 1.78 inches

Although I didn’t specifically record three-shot groups, I did observe that with high-quality ammo, the rifle would usually print the first three shots at or under an inch at 100 yards. After that, the barrel would be hot enough to spread impacts out a bit. The most consistently accurate ammo in this rifle was Hornady’s Precision Hunter 145-grain ELDX, followed by Remington 130-grain Core-Lokt Tipped, and Federal Premium 130-grain Nosler Ballistic Tip.

The .270 Winchester isn’t exactly the most accurate chambering when it comes to factory ammo, but the Mark V Hunter shot it well—especially for its barrel weight. 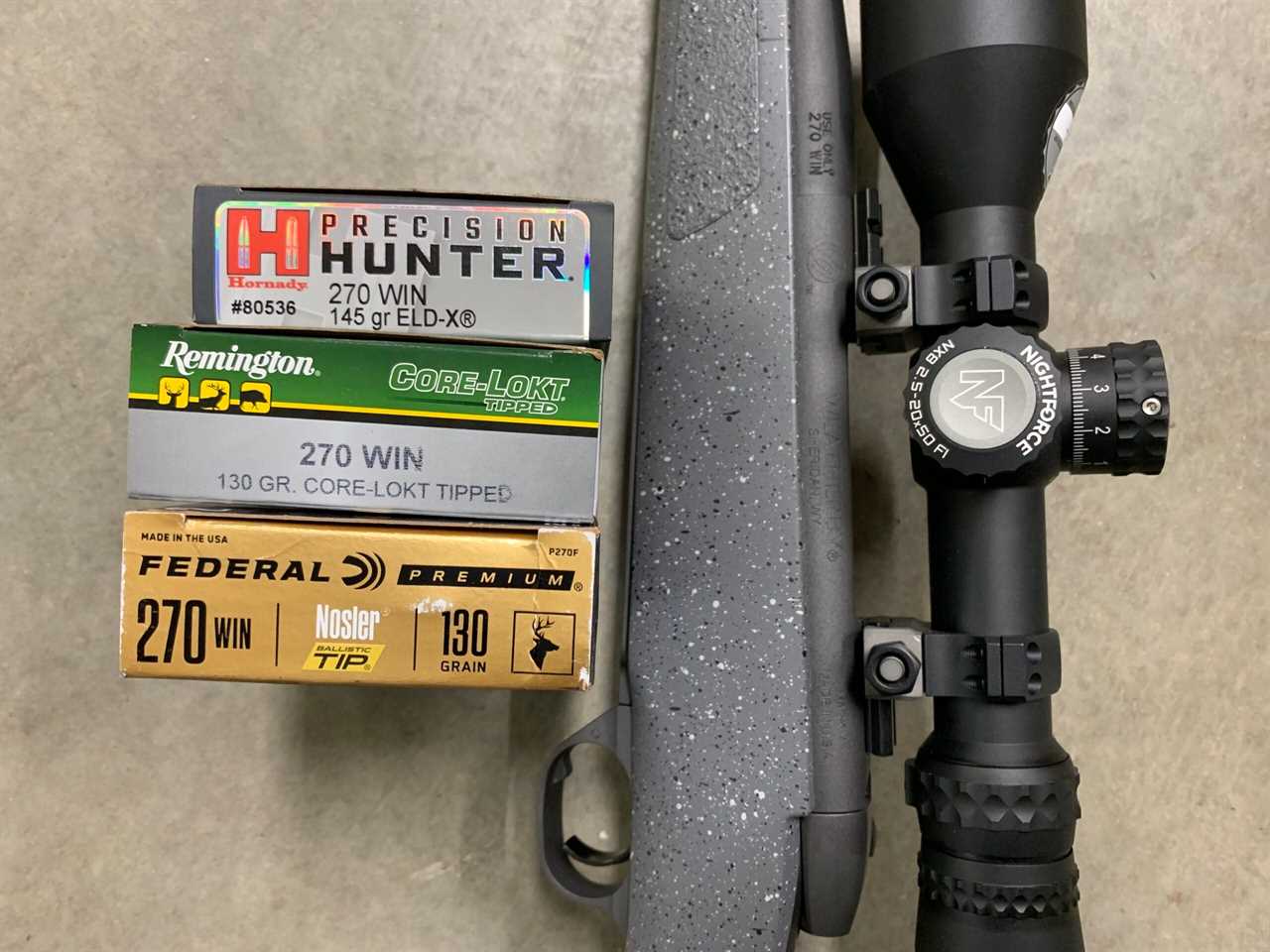 What the Weatherby Mark V Hunter Does Well

The Weatherby Mark V Hunter delivers a genuine Mark V action, a good stock with modern ergonomics, durable coatings, and good accuracy—all at a price that’s below any other Mark V. It’s a high-quality hunting rifle that will outlast you.

What the Weatherby Mark V Hunter Could Do Better

I’d like to see the barrel fit a little bit more evenly in the barrel channel of the stock. I also think switching to hex or torx-head action screws would be nice. It would make it a little easier to torque them without marring or damaging the screw heads.

This is a good rifle at a good price. Although MSRP is $1,500, you can find it retailing for $1,350. It nearly made the $1,200 cutoff for the mid-priced rifles test that I conducted this fall and shot very well for a factory .270. It out-shot everything in that test with hunting ammo and similar barrel weights.

Mark V rifles aren’t cheap, but this is the most-attainable model yet. It’s not sacrificing any meaningful attributes for value, and it’s an all-around great hunting rifle. It’s light enough that I’d pack it sheep hunting, and its coatings and materials would weather the worst Kodiak rainstorms. If you’re interested in getting a Mark V, but don’t need a flashy one, this is an excellent option.